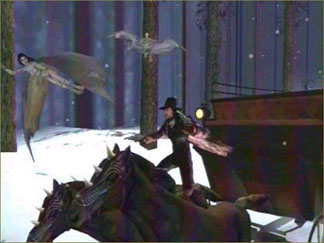 Dr Jekyll/Mr. Hyde, Frankenstein and the Wolfman are there. You name ’em. I’m sure we all can relate to these monsters of the darkness. They’ve probably frequented everyone’s nightmares, a time or two during our early childhood days. Their supernatural powers, their hideous deformities, dark presences, and murderous ways haunted our imaginations long after the horror movies ended.

How many wet-the-bed, blanket-hiding, pillow smothering, stuffed animal clinging, flashlight shooting, parent intruding episodes can be blamed on these terrible villains? They seemed invincible and immortal. No matter how many times they were killed they ALWAYS came back. They systematically fed on mankind’s weakest characteristic of them all: Fear! Ha! But that’s all about to change.

Fear is about to be placed in the other heart. Oh, it won’t be done by garlic necklaces, holy water, silver bullets, or wooden stakes alone, but more so by a name. But this isn’t just any ordinary name. The one who owns this name hunts evil so fiercely that the very mention of his name spreads fear through their empty hearts. He brings with him the vengeance of all mankind, true of heart. He is a holy warrior sent by the church to kick some serious monster you know what. There is only one man for monsters to fear and his name is Van Helsing.

In Saffire Game’s horror thriller, it’s the turn of the 19th century, and monsters are preying on the innocent during the cover of the night. The Cardinal Jinette, priest of the Vatican Church has waged war on these creatures of the night for hundreds of years by way of his own secret society of monster hunters.

Over time, this secret society of hunters has made a name for itself, but not so much as one individual hunter himself, the much feared Van Helsing. Van Helsing was found on the steps of the Vatican some years back with no memory of his past. He was taken in by Cardinal Jinette who quickly discovered his great skill in combat. The Cardinal inducted Van Helsing into his secret society of monster hunters and there is where he earned his fear reputation.

Now duties have called him to the forsaken town of Transylvania to face the greatest vampire that ever cursed the earth, Dracula, and his sizable army of undead minions, and dark allies.

Upon his arrival, Van knows this will probably be his biggest test, and yet a sense of familiarity surrounds this mission. He hopes that he can find some clues to unlock his faded past as he sets out to face his greatest adversary.

Van will spend just about his entire venture in Transylvania. The settings are quite morbid and yet there is a dark tranquil beauty that one cannot but help to notice. The streets are empty and run-down as if you had entered a ghost town and yet lighted windows, occasional wagons parked outside, barrels and storage crates lining the buildings, and mild street lighting tell you that the town is very much alive with life.

Outside of town, winter has taken it’s toll as snow covers the ground and vast mountainside. With the exception of the tall pines, most of the trees have lost their leaves and some have even cracked near their bases and fallen over the small icy streams that flow to rocky valleys. In certain places you can see stubborn overgrowth left from the spring reaching out from the ground’s snowy blanket. And if you make it to the higher parts of the mountainside, you’ll find a jaw-drop view of a thunderous waterfall bringing the mountain to life with its presence.

The further you explore you’ll realize that this time frame, the turn of the 19th century, seems to reveal evidence of a new era of science and technology. On the outskirts of town the train is beginning to replace the horse and buggy. Some houses up in the hills are equipped with watermills.

Guns are fast replacing the sword and dagger. Your travels will take you to libraries with bookshelves towering to the ceilings and castle laboratories filed with giant machinery and other mechanical contraptions and inventions, all proof of science beginning to break ground in the new world. NOW we take all of this morbid, yet beautiful scenery, the ushering in of a new era of science and technology, and we mix that with black magic, sharp blades, and some heavy firepower. The result is a blood-curdling, hair-raising, action-packed, gothic thriller that’ll keep you on the edge of your seat the entire game.

And of course Van Helsing will have his work cut out for him. Dracula holds much sway and many followers in Trans. If you want a piece of the "Count" you’re gonna have to get through THEM first. THEM being a massive army of skeletal undead. THEM being a fleet of stone gargoyles, Dracula’s terror of the skies. THEM being a horde of Dwergi, a creature similar to a heavily armored Ewok(see Star Wars) with a long spear, throwing axe, and a bad attitude. THEM being flesh-eating fell spirits, killer-screaming banshees, evil wisps, vampire bats big enough to suck blood from a human corpse, and all other kinds of things that go bump in the night.

And that’s just for starters. Dracula has recruited some heavy hitters, as well, to help insure your much wanted demise. Expect special guest appearances from monsters like, the Wolfman, Igor the Hunchback, Frankenstein Monster, and Dracula’s trio of Demon Vampire Mistresses, each competing to prove their loyalty and devotion to him. And believe me, these ladies stand behind their man. If there’s anything left of you after Dracula’s fiends get done with you, then you might be unfortunate enough to take on the man himself who only has the power to defy gravity, control the elements, shape shift, and of course an insatiable thirst for blood. No biggie right? Right.

You’d think that with such odds stacked against you the best thing to do would be to catch the first a.m. train out of town and never look back. But that’s not Van’s style. Van’s the kind of guy that doesn’t tremble in the face of fear. You could say he’s the "calm" before the storm. When his foes tell him in so many words they desire to rip him apart, he doesn’t raise his voice, but keeps his emotions in check and responds with either a moralistic word or two about his duties or objectives or when the opportunity calls, a bit of innocent sarcasm. Whatever the situation, he always manages to keep his cool. He even gets bonus points for finishing a level with his hat on. But believe me when I tell you, Helsing is not just a man of all talk. In fact, he can back up all his words and then some.

To start, he’s got quite a few moves up his sleeve. With his fast reflexes, Van has the ability to dodge most attacks by rolling out of the way quickly and effortlessly. He can wield and handle two weapons of choice simultaneously with so much grace that even Dante(Devil May Cry) would be envious. With certain weapons he can take a single jump, glide briefly in mid-air and get off a couple rounds before his feet hit the ground again. He can use his "wall jump" ability to get to higher places or even jump over his enemies when backed into a corner or tight spot. And when the stairs or elevators aren’t available, he can use his "grapple gun" to pull or swing himself to those hard to reach places.

Then there’s the arsenal. In the beginning you start out with a set of double pistols and a nasty ninja-star-looking "tojo blade." Life is good, but gets so much better as you progress through the game. Along the way, you’ll find more deadly weapons to add to your stock, including the double scimitars, gas-powered crossbow, shotgun, lightning gun, the decimating Gatling gun, and if you’re fortunate enough to stumble upon it, the legendary elephant gun, a gun so powerful legend says it was cast into the netherworld so no mortal could wield it.

What’s more is all of Van’s arsenal can be upgraded, via the armory, to be more effective against certain creatures. The double pistols can be upgraded with silver bullets, perfect for knocking off werewolves and vampires. The shotgun can be upgraded with incendiary ammo to reduce stone monsters into pebbles, and the crossbow gets a boost with explosive tipped bolts, good for rock demolitions. As you encounter different enemies throughout the game you will eventually learn their weaknesses and what weapons work best against them. And since there is quite a diverse amount of monsters throughout each mission, you’ll have ample opportunity to give all your new toys and upgrades the love and attention they need.

The controls are set in such a way that you can macro your choice of long range and melee weapons with the touch of a button and the flick of your directional stick. Being able to easily change weapons in the middle of combat boosts the fun and intensity of the game through the roof. It’s lots of fun to experiment with different combinations and discover new lethal melee combos.

We can top that all off with great voiceovers from big time movie stars like Hugh Jackman (played "Wolverine" in "Xmen" movie). Let’s be honest, Hugh is the reason we gave the movie a second look! All the coolest scenes and skits are wonderfully captured from the motion picture, so gamers get that "big screen" feel.

The bottom line is that "Van Helsing has so many good things going for it, there’s just too much to squeeze into one review. Don’t take my word for it. Just go pick up your copy today and find out for yourself. This game’s a classic battle of black magic vs. heavy metal with good visuals and a solid story plot. Add to that a hero with all the right moves, arsenal, class and cool and you have nearly the perfect game. There’s just as much suspense, action, and drama here as on the big screen. If you liked the movie, you’re gonna love the game, no doubt. I’m putting 4 1/2 GiN gems on Vivendi Universal’s new thriller hit.