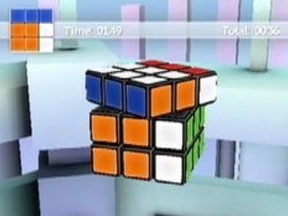 When I was in college, a favorite pastime had me sitting down and timing my then-girlfriend, now soon-to-be wife, Mary at how fast she could put together a Rubik’s Cube. She could usually do it in just under a minute.

I’ve always been one for a good puzzle, and in my mind, there is no puzzle higher in fun or prestige than the Rubik’s Cube. So imagine my intrigue and skepticism when Rubik’s World showed up for the Wii with its multi-colored "Cubies" in tow.

We’ve seen what failures can result from bringing hands-on puzzles into the gaming world. Probably the most shining example of this is with Jenga, because, let’s be clear, Jenga for the Wii was extremely upsetting. I mean just awful. "Wasting your life’s precious minutes" sweated off that game, so I’d be lying if I said my bias wasn’t weighing heavily against Rubik’s World being anywhere on the positive side of my gaming experience.

However, at first introduction, I found that the overall set up of the title’s menu was almost impressive. The animations were stylish and geometrical and had a sense of fun that made me want to venture deeper into the game.

Getting into the challenges, the eight modes of gameplay proved unique from one another, and not just a rehash of screens one after the other. Each mini engaged in its own way, but with all that said, I found limits to just how far that entertainment would stretch.

Like any puzzle game that relies on minigames to add on to its main entrÃƒÂ©e-in this case, the Rubik’s Cube-what happened in all of these multi-leveled challenges was that they often got very repetitive despite their uniqueness, to the point that prolonged play time would end up giving me a massive headache.

Still, there were some gems here. The best of these mini-modes was Deconstruct (a shooting gallery game), Switch (a color chain-reaction and matching puzzle), View (a "match what shapes you see" challenge), and, of course, the different options of Rubik’s Cubes (2×2, 3×3, 4×4, and 5×5).

The controls used to navigate through these puzzles might have seemed tricky at first, but the same can be said for many great Wii titles. After a few rounds to get myself oriented, maneuvering my way around the cube got a little easier, until I had no problem working through the game.

The music for Rubik’s World is probably the lowest point to the title, mainly due to repetition and lack of imagination, but this setback can be easily discarded with the push of the mute button.

The truth is that there is a lot to discover in Rubik’s World if you have the time and the smarts to get through the challenges. Also, if you’re just looking for an interesting puzzle game to sit down and play with some friends, this would also be a good bet until the Wii Hula Hoops hit the shelves in late 2009.

Oh, man. Wait. That was a joke"right?