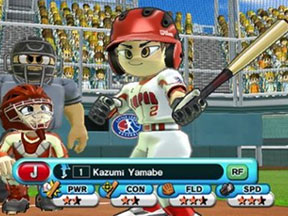 In my experience, team sports games, for the most part, are a major waste of time. If you want to go play a team sport, then get out of the house and play a team sport for real. This has always been my contention, mainly since I had no interest whatsoever in these kinds of activities, but saying this makes me feel like those grumblers that claim basically the same approach to games like Guitar Hero and Rock Band.

I do feel like I’m missing something, some core gratification that team sports games have failed to show me, but I don’t care enough about this genre of game to look any closer unless I’m really surprised.

This has happened only twice in my gaming lifetime-first, with the Blades of Steel on the NES, then most recently with the always playable Wii Sports.

So when Little League World Series arrived for review, my enthusiasm for the game was slightly dulled, but I decided to give it a chance to tear down my preconceptions.

In LLWS, you get to play teams of anime-looking players against each other in much the same fashion of the baseball portion of Wii Sports, though this particular take on America’s pastime has a few more gameplay options and several more menu features.

Still, the appeal of the game just isn’t there. The visuals of the game, while vivid and well produced, are techniques we have all seen before. Anime characters are all the rage nowadays, so I can understand the reason for selecting this style, but this also makes me ask, "Where’s the innovation?"

Gameplay produces more lukewarm reactions, as the batting and pitching are so straight forward, you might as well not even put any effort into playing the game at all. Pitch, swing, twist or wag the controller, press a few buttons: these are as intricate as the game controls get, and once you’ve got it down, repetition makes the game quickly lose its luster.

To give the game yet another layer of gameplay, power-ups are added to the mix, making an already easy game easier for no reason at all. These power-ups are definitely fueled by the reigning anime atmosphere found in the game, because at certain times your character will suddenly be surrounded by a fiery aura that supercharges their performance.

Different game modes are made available should you want to dive deeper into LLWS. The main mode comes by way of the actual World Series, then there’s the option to play quick exhibition games, followed by a comprehensive training mode. There’s also a clubhouse where you can view the awards and high scores that you’ve earned throughout your experiences with the game.

Finally, a nice addition to the game is the Skill Challenges mode that offers a set of minigames that test your batting and pitching abilities. "Pitch Bowling" is probably the most engaging of these, but it is still just a side dish to a much boring larger meal.

Needless to say, LLWS didn’t do much to change my opinion on team sports games, which would be my real scale on how much I recommend this title. Basically, I see this as a baseball game for kids, obviously, so if you’re a mature gamer looking for a real challenge, I’ll say LLWS isn’t going to oblige you on that front.