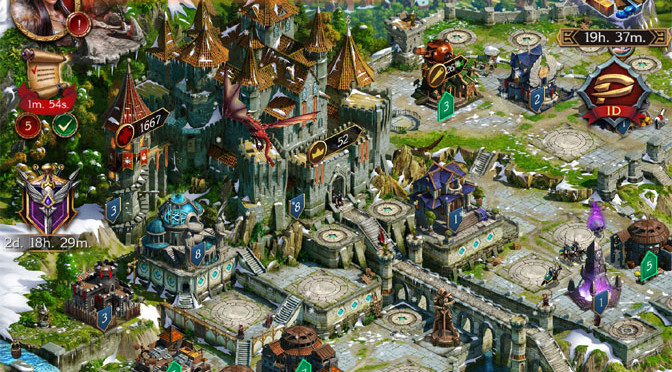 The growing prevalence of massive multiplayer online (MMO) games seems to be approaching a new zenith, thanks in part to the transition from social media to mobile phone apps.  While this may sound redundant, Stormfall: Rise of Balur rises to the peak of that zenith all the while bringing to the table the chance for users to become part of a larger community of gamers on its Facebook page, gamer videos, and message boards. I found this to be quite interesting and after pursuing pages of user comments, hints and tips, I was quickly surprised by how much communal depth an iPhone game like this could possess! This is one of the best for that which I’ve ever experienced.

The daunting task of world building brings with it the potential for feeling overwhelmed, and this game is no exception. Yet, the developers at Plarium Gobal Ltd. have accounted for this when they included an extensive in-game tutorial. Sadly, they seemed to have missed the sweet-spot of how much time a helpful tutorial should take. The continual pop-ups and redirections between screens became, in my opinion, weighty and unnecessary. But fear not user! There is a light at the end of this instructional tunnel!

Once you’ve stepped unfettered into the realm of independent game-play there are an infinite number of combinations for economic specialization and battle tactics, and upgrades galore. Developing a balanced in-game economy through the construction of mines, farm houses, and other commercial operations is key to quickly amassing an army strong enough to help rebuild Stormfall. Every action you take, for better or worse, is done in real time. This can make for an enhanced metro experience if your commute is long or, once you reach a high enough level, can allow you to multitask on other things while you slowly expand your empire.

The amount of complexity found in Stormfall: Rise of Balur is almost beyond belief. You are literally building an entire empire here with all the mines, defenses, housing, castles and support structures that entails. The game is free to play, but you can spend money to speed along the construction of various buildings. It seems like there is a very nice balance though, so I don’t think extremely casual players will feel like they are getting their arm twisted to have to play to play. That said, some of the build times at higher levels can take days, so if you really like the Stormfall, and there is a lot here to like, you will probably feel that kicking in a couple dollars to get your kingdom in shape and support the developers is money well-spent.

Like the city building, combat takes place in real-time as well. When you send forth your armies you get to watch as they attempt to smash into your opponents. Of course this means you can also be attacked in real time, even when you are not actively playing, so you best have a good defense in place all the time. Some people might find that aspect of the game a bit too nerve-wracking, but it’s a very popular mode of gameplay these days that many people really enjoy. Knowing that you can attack and be attacked at any time is as exciting as building up your own individual kingdom, just in a slightly different way. The planning and the attacking (and defending) go hand in hand here.

Graphically, Stormfall: Rise of Balur is a stunner. For an iOS or Android game, this one is near the top of the charts. It looked amazing on my iPhone’s screen, and even better on a tablet where the graphics didn’t distort when displayed on the larger screen. It’s hard to believe this one is a free title actually.

For those of you that have read my previous reviews you may have noticed the emphasis I place on the music and sound effects of iOS games. I often feel most sympathetic for the musicians behind these smaller platform games, and in this regard Stormfall: Rise of Balur has taken a special place in my heart. Jesper Kyd, winner of the 2005 BAFTA Games Award for Original Score for Hitman: Contracts, and composer of such games as the Assassin’s Creed series, the Borderlands series, and Minority Report: The Video Game (which, thanks in part to the Blockbuster down the street from our house, I got to play the crap out of while in middle school), brings an emotional depth and texture to this game that I would like to be provided in my everyday life. I mean, who knew that there was even a BAFTA category for video game music? Not I! The depth of this music would seem out of place in a much smaller, less well-put-together game. But because of its scope, Stormfall: Rise of Balur, and it’s musical score, holds together as one of the great mobile strategy titles of recent memory.

So check it out! And while you’re at it, feel free to leave some comments in the box below. Perhaps we can ally our kingdoms? In any case, see you in Stormfall!

4 thoughts on “Stormfall: Rise of Balur Has Community, Challenges and Combat”