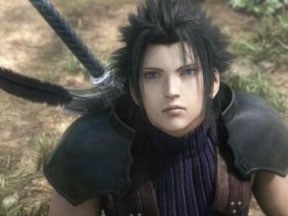 Crisis Core: Final Fantasy VII explodes onto the PSP platform gracefully shedding some light on perhaps a few unanswered questions and filling in some left over loop holes from the awe-inspiring Final Fantasy VII series which wrought much praise and attention amongst avid RPG fans. More than just solidifying the series and putting the overall storyline into a much greater perspective, this prequel to FFVII which reaches into the past and gives new life to a former Final Fantasy timeline also vaguely reaches into the future expanding on new cutting edge game play mechanics perhaps defining the way future RPGs should be played out.

Set seven years prior to the events of the first Final Fantasy VII, the game’s storyline focuses on the powerful Shinra Company which is rapidly increasing its influence worldwide through the monopolization of precious mako energy and its strong military presence. Based in the thriving city of Midgar, widely known for its vast prosperity, Shinra is on the verge of establishing absolute dominance over the world.

Of course with great power comes great responsibility. Fortifying its infrastructure with an organized group of highly skilled combat operatives known only as SOLDIER, Shinra intends to maintain its dominant stance on the new world by any means necessary. The elite within the group – those strong enough to be deemed SOLDIER 1st Class – are respected and idolized by the citizenry. Players will closely follow the path of a spunky young SOLDIER 2nd Class named Zack who aspires to become a 1st. He spends his days carrying out assignments under the guidance of his 1st Class mentor, Angeal.

One day during a military operation in Wutai, a large number of SOLDIER members, under the leadership of 1st Class operative Genesis, go missing. The severity of the situation prompts Shinra executives to deploy even more SOLDIER operatives in hopes not only bringing an end to the war in Wutai but also to conduct an extensive investigation into the mass desertion of its former members. The ones assigned to the mission are Zack, Angeal, and the 1st Class hero who is known the world over as Sephiroth.

The overall presentation of the game is visually stunning, perhaps toting some of the best real-time imagery and cinematic cut scenes ever seen on the PSP platform. And even though time and time again hardcore fans of the series have been wooed by some amazing eye candy churned out from each defining series, the graphical presentation and style of Crisis Core looks so high-def that even the most dedicated veterans of the series will be moved to raise an eyebrow and curve up a slight smile at Square Enix’s newest work of art.

Despite such a strong show of sound and visuals as well as a new angle to an already compelling storyline, the biggest talk about Crisis Core would have to involve its new game play mechanics. Granted we may have seen an earlier version of this game concept in Final Fantasy XII but that same concept has made considerable leaps and bounds since then. For starters, the sheer speed of the new turn-based battle system reaches far beyond that of FFXII in the fact that the pace of combat is almost as equally fast as a true action adventure. Believe it or not however-that’s a good thing. Initially, when you first start out, you’ll probably find yourself doing more than a little mindless button mashing while you’re adjusting to the speed and fluency of combat system as the action might be a hair bit erratic. However, with just a little time, patience and focus you’ll adjust quite comfortably to the pace of the action allowing you the opportunity to implement your own personal combat strategies ultimately enlightening your overall game play experience.

The game helps players out a bit by freeing you from the hassle of being responsible for the battle commands of an entire party of characters and instead allows you to focus on just one. Players will control Zack throughout the entire adventure pitting this one man army against hordes of enemies and fierce bosses. Eight times out of 10 you’re going to find yourself vastly outnumbered. Fortunately, though the system is turn-based, you’re free to move about the field of battle on the fly at all times. You can take advantage of this new mobile freedom by strategically pitting yourself at the backs of your enemies whenever possible to achieve critical hits, attack multiple enemies or to simply buy yourself a little borrowed time in a combat situation quickly beginning to turn sour. Players will need to rely heavily on skills such as dodging or defensive posturing to help keep Zack out of harm’s way.

The key to having success in those intense battle situations is finding a way to stay in the battle long enough to take full advantage of the games new "Digitial Mind Wave" system which is essentially a virtual slot machine which will constantly roll out random combinations during combat encounters. Based off nothing more than pure "luck," when the DMW kicks out the right combination players will be given a number of bonuses including devastating special attacks, summoning powerful allies, or even leveling up. Admittedly, some might be skeptical about not having any control whatsoever over this new "gamble" variable but as time goes on you’ll find the DMW a very rewarding and key game play feature.

Players are free to follow the main story line of the game if they so see fit but if they do they’ll miss out on the cool "mission modes" which provide a nice diversion between the main story plots. The rewards that can be acquired from these short side missions are worthwhile giving players the chance to earn valuable items, materia, or, via the DMW, or even level up if you’re lucky. The mission modes provide great training exercises for both vets and newcomers as well as a means to beef up character stats for those future epic encounters.

Hands down, Crisis Core: Final Fantasy is just one more definitive reason to own a PSP. It’s the total package RPG bolstering top-notch visuals, superb audio, and genre defining game play elements. If you’re an avid fan of the Final Fantasy VII club then you owe it to yourself to dive head first into this one and rediscover for yourself the dynamic storyline of the original game. Disappointment is not an option when it comes to Square Enix’s newest RPG as it racks up a nearly perfect 4 1/2 GiN gems.