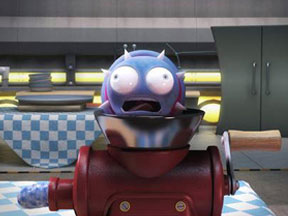 When a game like Squeeballs Party gets released into the gaming world, you know that something is both very wrong and very right with modern day society.

Squeeballs is (as the title would suggest) a quirky party game that revolves around a bunch of cute and cuddly creatures with loveable personalities that are based on the little Squeeballs toys you’ve probably seen around in drug stores and local markets everywhere.

The objective for this game: Inflict as much pain on these adorable characters as possible before the time limit is reached.

Through activities like cooking (personal favorite), bowling, slingshot painting, and target practice, the Squeeballs find themselves in terribly difficult situations over which they have absolutely no control.

Some people would probably find this a bit disturbing. Grinding up screaming toys on a cheese shredder is not the type of thing a lot of little kids would love.

Then again, it is the type of thing many of them today would. On the Amazon site (you can link to it above to buy the game) there is a little video of a young girl torturing these Squeeballs and having a lot of fun doing it.

How you feel about this is up to you I guess. The game has an E 10+ rating, but there are a lot of folks that probably think it should be a T for teen in this case, especially with the Wii interface letting you actually do the torture yourself.

That age-old factor of laughing at the naÃƒÂ¯ve guy who tripped on his shoe laces is boldly defined in this title, as we tend to find vast amounts of entertainment in the apparent demise of these animals, but as core as that entertainment value is, a video game can only go so far before such a gimmick becomes pointless and dull.

Squeeballs transcends this obstacle in two ways. The first is to deliver up detailed cut scenes which introduce the different gaming choices. The majority of these scenes are good to watch twice before you’re simply ready to skip them and move on to the challenge at hand, but there are a few introductions that deliver the want of repeat views.

Next is the composition of the mini-games themselves. While something like bowling may seem a bit rundown after Wii Sports triumphed all angles of this particular gaming activity, Squeeballs moves the challenge a bit further by setting up specific rules for different rounds and a different control scheme to break up the monotony.

For example, you can spin the ball like mad to control it after its left your hand. Other games, such as Cooking, require little skill but deliver sinister fun combined with a readily achievable goal. The resulting gameplay tends to get addicting.

While Squeeballs is not going to come anywhere close to Game of the Year status, the overall concept and execution is presented well enough that the title deserves some degree of praise, and the way that it effects a group of casual gamer players as both a conversation starter and an enjoyable way to pass the time means it gets overall bonus points in my book as well.

Squeeballs earns 4 out of 5 GiN Gems.