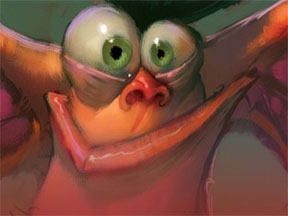 Today in our exclusive console DLC titles week, we take a look at an Xbox 360 game, having reviewed a PS3 title (Landit Bandit) earlier.

Video games have made some pretty ridiculous concepts seem commonplace in our lives. I mean, have you ever stopped to think about how absurd the idea of a talking blue hedgehog moving faster than a person can blink is? Or how about giant gorillas jumping into barrels and being blasted dozens of feet in the air? Heck, there’s even a magic pink puff-ball that can eat just about anything in front of him.

And yet as odd and quirky as the bases for these games are, Sonic, Donkey Kong and Kirby are three of the most recognized, heralded franchises in the gaming industry. But as Ancients of Ooga proves, Kirby’s not the only one who can chow down in a game.

Ancients of Ooga is a platform/puzzle game for the Xbox 360 Live Arcade which has a concept to rival even the quirkiest of games. The Ooganis, who look like alien cavemen, went against the will of their chiefs and started listening to the evil Boolis. Taking advantage of the fact that the Ooganis can (and will) eat anything, the Boolis fed them mind-controlling slugs, which forced Ooganis to lock their chiefs inside cages, leaving them for the Boolis to kill. This is where the story begins.

As the Great Spirit of Ooga, you’re charged with guiding the Ooganis to freedom and restoring their independence from the Boolis. Players can take control of any Oogani available on the map to complete the objectives in a level, but with a catch: each character has different abilities, and not all characters can access the entire map. This is where a little bit of strategy and puzzle solving comes into play in Ancients of Ooga.

For the most part, the game takes on the standard fare that all platformers do. There’s a button to jump, one to attack, one to use a special ability and one to interact with objects. However, Ancients of Ooga features a gameplay mechanic that is as utterly ridiculous as it is useful. Ooganis can eat just about anything, including each other. They then have the option to either spit it out or swallow it. Picking up and chewing other Ooganis generally has no practical value, but it is hilarious.

All kidding aside, this gameplay mechanic is one of the core features of the game since it allows players to pick up objects while still moving freely. But the novelty of chewing on just about anything wears off relatively quickly, and it soon becomes apparent that there’s not a lot of variety in the structure of the game. Essentially, each level boils down to go here, kill a couple enemies, pick up this item and deposit it here.

The lack of variety in the gameplay would be forgivable, but there’s just not enough challenge in the game to make it worth coming back to repeatedly. There’s very little punishment for dying aside for a small loss in the overall level score, and most of the puzzles are more tedious than they are difficult.

Yet in spite of the lacking variety in gameplay and overall challenge, Ancients of Ooga has an undeniable charm to it. The game’s presentation gives it a feel all its own, with short cut scenes in between each level that detail how the Ooganis betrayed their chiefs. As the Ooganis grunt in their language, the camera pans to cave drawings which tell the story along with subtitles.

The game’s general art style suits it well too. Character animations fit the Ooganis perfectly. With each step an Oogani takes, its head and extremities make an over-exaggerated motion, emphasizing how awkward the creatures are. Levels are colorful for the most part, and despite not having the most varied objectives, the level designs are usually distinct.

Though not as wide-ranging as the visuals, the game’s audio does a nice job complementing the art style. Ooganis sound as bemusing as they look, and sound effects can sometimes have uncanny detail. For instance, one character type can jump up and dive bomb enemies to eliminate them. Trying that same move with a different character also produces a dive bomb, resulting in a bone-crunching flop.

All in all, Ancients of Ooga isn’t the greatest Xbox Live Arcade game out there, but there’s no doubt that it fills a niche few games come close to fitting in. Ancients of Ooga gets 3.5 GiN Gems out of 5 for its quirky charm.