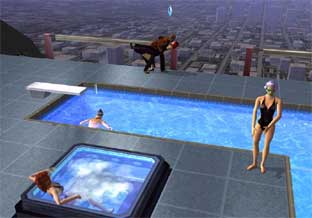 First off, let me give a shout out to the Sim Masters all around the globe. This is Jake Skyes, the hottest movie-star Sim on the face of the virtual planet, broadcasting from a Gin Site near you. Now you’re probably wondering why "Double J" isn’t doing this game review himself. Well I told him not t sweat it, just kick back, and let yours truly handle this gig. Besides, I figured who could give gamers the best 411 on the newest "Sims: Bustin Out" number than mwa, THEE virtua sim, himself.

Now I been playin this game all my simulated life, and I’m telling ya, you dive into my world without a gameplan and you’re gonna find out the hard way, ya heard? If ya wanna make a life for your Sim you gotta decide on a career for ’em. There are initially seven different career paths that your Sim can follow. Each path has it’s own set of required skills and offers it’s own rewards. You can choose from movie-star, mad scientist, gangster, fashion victim, paramilitary, counter culture, and jock career opportunities.

But hold on playa, it’s not instant success from the jump. Sure, you got a career all picked out, but now you gotta find a means to succeed.

For starters, you ain’t got no place, which means you gonna be stayin at your Mama’s house for a while. Ya barely got any money, and that’s most likely due to the fact that you ain’t got off your lazy rear to go get a job. And then to make matters worse, if your life venture starts out anything like mine, your about to lose your precious red scooterbike, your only transportation, in the next 5 minutes. That’s right playa. Now pull up a chair and let me break it down to ya.

Check it. I’m at my Mama’s house, chillin on the front lawn, daydreaming’ about this fly honey I met at the club the other night. We on the dance floor gettin ready to make out when suddenly I’m snapped back to sim-reality by my Mama’s shouting voice. "Jake Skyes! Wake up boy! Malcom’s repossessing your scoota!"

I wake up only in time to see my ride being vaporized into thin air at the hands of Malcom and his mysterious spacegun-without-a-name which I have now entitled, "The Indian-giver."

Hrrrgh, Malcom Landgrabb. If ya don’t know ’em, you will know ’em. While he’s considered to be a very successful man, his social skills leave much to be desired. Putting himself and his fortunes before everything and everyone else has left him lonely, broken-hearted, and mad-off-the-chain! Yeah, see, ever since my Mom divorced him, he’s been systematically going through town and taking back all f the things that he gave us or even his own children, Mimi and Dudley. Talk about low-down.

Anyhow, ever since that day, Mama had been goin off the deep end, parading around in her pink robe and her pink night cap and her pink bunny slippers, hollerin about how I need to take care of myself and how I need to do better for myself. Man, she was on my case all the time, setting up mini-goals for me to reach around the house like reading, painting and house-keeping. What could I do? You wanna play by your own rules, you gotta get your own piece of the rock. The only good thing is that by meeting those goals, I was able to unlock "new clothes" and "social moves", a.k.a gestures, for future encounters.

Finally, I couldn’t take it no more. I met the goals around the house and I was tired of playin by her rules. I sat Mama down on the couch and gave it to her straight. I told her I was plannin’ on moving out, landing me job somewhere, and gettin’ up out the hood. She asked me what I had in mind and I told I was thinking about pursuing a "paramilitary career". She said, "Boy you must be outside your mind! I’ve seen your art paintings and how you spend all day lookin’ and talkin’ at yourself in the mirror. Why with your "creativity" and "charisma" you could be a movie-star. My boy, Jake Skyes, the movie-star!" I got to thinkin’ maybe Mama was right, so from that day I set my sights on makin’ it to the big time.

See, now that’s another thing. You shouldn’t just go choosing any random career to follow. You gotta step back and look at the whole picture. See your Sim for who they are. What’s your Sim’s personality like? Are they neat, outgoing, active, playful, nice or a variation of all of the above? More importantly, what skills do they bring to the table? Your level of cooking, mechanical, creative, body, logic and charisma skills will better help you find the career for you.

Wanna be a jock? You’ll need to hone your body and charisma skills.

So you wanna be a mad-scientist? You’d best work on your mechanical skills then. Even a gangsta has to stay in shape and have a flair for creativity, ya feel me?

Anyway, back to what I was sayin’ before. I had decided on my career, but now I needed a plan. I had no real money, now no transportation, and if I didn’t make good on my word, Mama was gonna see to it I didn’t have a place to stay either. So my only plan was to wait for that moment of golden opportunity.

Sure ‘nough, a few days later opportunity came in the form on Mimi Landgrabb, Malcom’s daughter and my new best friend. Turns out Malcom had come by her place and vaporized some of her valuables too. In an act of rebellion against her father, she somehow managed to replace my precious red scooter bike. Things were starting to look up!

I spilled the beans to her about my plan to get out on my own and it turned out that she was all for it. She said she could get me a base level job, in the movie career, at the mall as a clown trying to get shoppers to spend more money……..Not what I had in mind, but I had to start somewhere. The only catch was the commuter bus only ran through her neighborhood and there was no way my scooterbike could handle the long ride from the projects to the mall each day.

Besides, no commuter buses run through the hood anymore. Last commuter bus came through here took a wrong turn, hit a chop shop, and left out a punch buggy. The choice was clear. Moving in with Mimi was my best option.

Things started out good. I got the job as Mall clown working from 9 to 3. The bus arrived at Mimi’s place everyday at eight sharp and the driver didn’t like to be kept waiting.

It didn’t take me long to adjust to my new life and before I knew it, a week later, I got promoted to "Show Side-kick". I busted out that number for a while and soon was give the opportunity to be a "Stunt Double"!

Being a stunt double came with mad advantages too. First off, the wallet got fatter, and later I was able to trade in my scooter on a jazzy new "Import S" street racing machine with a convertible top.

Holla! With my new wheels I was sure to get noticed by the higher-ups in the biz. Life was good, but being a stunt double was getting to be rigorous work. Then, when I hit the house, there was always something broken or something to clean up. Mimi, was cool, but the girl had habits. First off she was hardly ever home. She’d be hangin’ out til all times of the night at the clubs with her "counter culture" friends and leaving me with all the everyday house chores and maintenance.

Man she was hard on appliances too. I was forever having to repair the espresso machine and she even wrecked my new arcade pinball game. It’s a good thing I read up on those mechanical-know-how books at Mama’s house. On top of that, she was broke around rent time on a few occasions, leaving me to foot the bill.

Things were going south fast and between home and work I was getting worn out. Yeah, that’s right, Sims wear down too playa. We gotta shower, bathe, and brush our choppers, to keep our "hygiene" level up and when we don’t get no sleep our "energy" level plummets. We need to "socialize" with other Sims so we feel connected to the world. From time to time we need to prop our feet, have a nap, or take a relaxing bath to feel "comfortable". When our "bladder" gets full we gotta empty them and don’t forget to flush!

We also need to do "fun" things so we don’t get grumpy and we’re happiest when our homes are clean and well-lit with nice furnishings. As I was sayin though, things had to change and change fast. I was starting to feel the jaws of life closing in on me. That’s when the lovely Bella showed up on my doorstep. Apparently, she was one of Mimi’s friends, who just happened to have some serious connections in the show biz. Thus, I felt the need to further get acquainted.

She said she had noticed some of my work as a stunt double and that she could probably get me promoted to the next level. Cha-Ching! Of course, that would mean relocating to her side of the world to a place called, "Goth Manor." Urhm, urhm, needless to say, by the time she finished her last sentence my bags were already packed. Mimi, took it kind of hard, but in the end she understood.