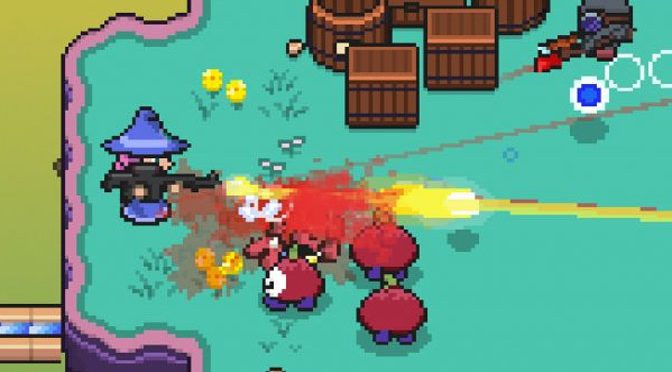 Hey all I’m back with another game review. It’s Trigger Witch, a game that combines the pixel graphics we have come to expect from games like old-school Zelda, but also the violent gunplay that you will find in quite a few Shump or bullet-hell type games.

Plot: The plot has tons of cliches, so it really tries to lean into the humor aspects. However, if it weren’t for some quirky moments, it’d probably be rather forgettable. Still, it’s kind of unique in terms of shooters. 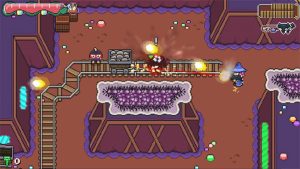 One of those quirks that makes the plot fun is the fact that Trigger Witch deals with a girl named Collette who is part of a group of witches who abandoned Magic to focus instead on guns gifted to them via a strange portal. As weird as that sounds, it does thankfully get explained by the end of the story. With witches you expect things like magic and spells, but with Trigger Witch you get rifles and lots of shooting. 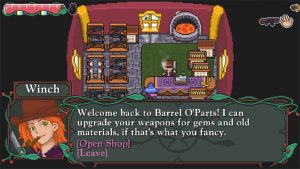 Gameplay: This game plays a lot like a 2D Zelda game, it even looks like A Link to the Past, but instead of a sword you fire bullets, and thankfully have an infinite amount of ammo, though you do have to reload, and you have a health restoring ability that refills through the murder of enemies, so you aren’t ever picking up anything but the money (called Gems) from enemies.

Except for those somewhat major difference Trigger Witch is pretty much a very short Zelda game. There’s only a handful of dungeons, so I got through the game in two play sessions, though they were four plus hour long sessions, so I did want to keep playing for long periods of time. Thankfully, Trigger Witch does have some re-playability too, but not a ton. 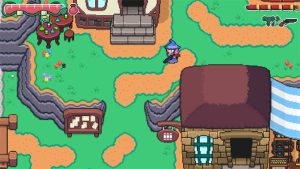 Another feature that helps to make Trigger Witch over the top in terms of review scores is the fact that it supports local co-op play on the Switch, Xbox or PlayStation. There are not nearly enough games out there anymore where two people can get together and play on the same screen, working together to accomplish their goals, go on quests, shoot lots of bad guys and things like that. That alone makes Trigger Witch a good choice for anyone looking for action-oriented fun with friends or family. 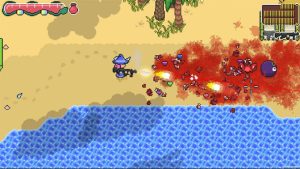 Like I said above, Trigger Witch looks a lot like A Link to the Past, though there are some differences, and some minor touches that add to the immersion. The biggest difference is that enemies, and you, bleed when they get injured and tend to explode into fountains of gore which was definitely a surprise the first time I killed something. Another little immersive trick used is the fact that Collette starts leaving a blood trail when moving if you get damaged enough.

Music: The musical score isn’t really memorable, but does go well with the overall gameplay. 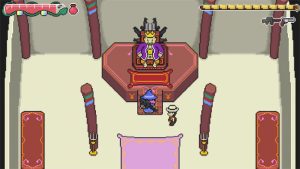 Overall: Trigger Witch is a fun almost Zelda-like clone with a fairly unique twist. Anyone who likes 2D shooters in almost any form will have a good time with Trigger Witch. It’s certainly different from most similar games, and that is not always easy to find these days.