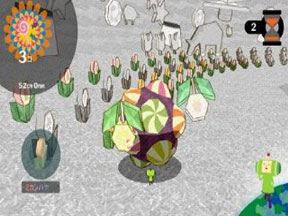 There are two games that I just play for the immense fun of playing: 1) Portal and 2) any Katamari game available, which brings us, of course, to Katamari Forever!

My wife says she hates when I play a Katamari title because "You can’t really explain what it’s all about effectively," which is where I think the franchise gains a lot of resistance overall. When Katamari Damacy hit the shelves back in 2004, it became an instant classic to some people-especially those on the design level-while others completely ostracized it.

Katamari Forever is a near-senseless game that can only be comprehended fully while following the game’s story, which states that you, the Prince of All Cosmos, must follow the misdeeds of your father, the King of All Cosmos, and bail him out of the havoc he creates by rolling up a plethora of objects found on earth in the hopes that they will be turned into stars or planets.

Katamari Forever is a near-senseless game that can only be comprehended fully while looking through the veil of western consumerism. In the games, you are the Prince of All Cosmos (i.e. – rich kid) who has been given the means to gather up anything-anything!-in the entire world and add it to create your own special planet or star or to even throw each of these newly-acquired belongings aside by turning them into stardust.

Okay, well maybe that’s putting a little too much thought into it, but you get where I am going. The great thing about Katamari is that this game can be opened up to interpretation, which is where all the best of the best games shine.

However, with all the think-power generated by this title, Katamari is still a game, and as a game, a sequel should always take a game to the next level. Enter the newest release of Katamari Forever, and this game doesn’t fail to raise the bar.

While the basic gameplay hasn’t changed much from the original Katamari (everything’s pretty much the same with the exception of a new jumping capability), what has become more interesting are the peripherals that surround the main gaming mode. In Forever, we have the option of playing as the Prince or switching over to one of his many, many cousins, my favorite of which is a little blue character named Shy.

You collect these cousins in various worlds throughout Forever, along with specially hidden presents and other collectibles.

As for the plot framing of Forever, it seems that the King of All Cosmos has been put into a coma after a collision with a meteor. To help keep the cosmos in order, the prince and cousins decide to create a Roboking, which proceeds to cause disaster after disaster.

Because of this, gameplay is broken up into two different modes, that of the King, which offers black and white revisits to previous Katamari sets in order to restore the King’s memory, and that of the Roboking, though they both end up offering more of the same challenges.

Beyond the original "Get to X size in X amount of time," Forever has also tossed in some interesting variation levels for players to roll through, including the illuminating firefly collection, the sprinkler Katamari, and the heated Katamari.

Another win on this game is the soundtrack. If happiness was ever able to be manufactured, it would have the sound of these Yu Miyake-created songs, all of which are unlockable for play in the game’s Jukebox mode.

Other features that make a favorable impression on Katamari gamers comes in the extras menu. With the aforementioned Jukebox mode, the extras mode also has a picture viewer for the in-game pictures you are able to snap during a level. Also, there is a section for several fun mini-games that are unlocked during gameplay.

So, while it is easy to see that this is just the original Katamari Damacy on steroids, it’s good to see that the developers understand what made the series’ original release so appealing, and did their best to deliver just what they thought the fans would want.