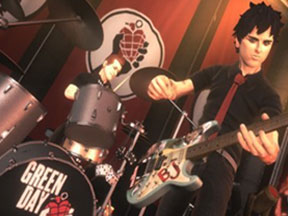 With music games still experiencing insane popularity, it’s no surprise that more and more groups will want to bring their music to the masses in this unique way. What other method can let bands really connect with their fans, allowing them to experience rock stardom without all the heavy lifting?

A plethora of titles have come out for both Rockband and Guitar Hero, with mixed success. There is Aerosmith and Van Halen for Rock Band, both of which captured the flavor of those bands without really pushing the genre too far off center. They included songs by the bands as well as those inspired by the groups, or that inspired the groups, or perhaps that the groups just liked.

On the Rockband side, you have The Beatles. Given how deep The Beatles catalog of hits is, (just about every frekin’ song they made) it was no surprise that all the songs on that game were from the band. There are no "Manic Monday" type tunes that may have been inspired by the group or whatever. It’s a pure Beatles experience. And Rockband Green Day follows that pattern. What we have are 47 songs and three unique venues all created by the punk-rocking Green Day from their early roots to mega success, Grammy wins and superstardom.

As full disclosure for this review, I’m not a huge Green Day fan. I didn’t really expect too much. But guess what? I was amazed at how deep their catalog actually goes. I’d heard just about every song on the game at some point, and even found myself liking quite a few of them. It was kind of like a trip down memory lane for me, with each song striking my memory as to when I had heard them.

Still, I decided to pull in some big guns for this review, so I invited my friend Alison over to play with me. She grew up listening to Green Day, and knew every song on the game as well as what album they came from. So here you have a superfan and a casual listener, both enjoying the anti-establishment rocking of this group. That’s a pretty cool endorsement, and says a lot about the band’s music and their appeal.

Specifically, from their 1994 Dookie album, we have "Burnout," "She," "Having a Blast," "Sassafrass Roots," "Chump," "When I Come Around," "Longview," "Coming Clean," "Welcome to Paradise," "Emenius Sleepus," "Pulling Teeth," "In the End," "Basket Case" and "F.O.D." From the 2004 award winning American Idiot album we get "American Idiot," "She’s a Rebel," "Jesus of Suburbia," "Extraordinary Girl," "Holiday," "Letterbomb," "Boulevard of Broken Dreams," "Wake Me Up When September Ends," "Are We the Waiting?," "Homecoming," "St. Jimmy," "Whatsername" and "Give Me Novacaine." From the 21st Century Breakdown album, their latest one, we get "Song of the Century," "Viva La Gloria? (Little Girl)," "21st Century Breakdown," "Restless Heart Syndrome," "Before the Lobotomy," "Horseshoes and Handgrenades," "Last Night on Earth," "The Static Age," "Peacemaker," "American Eulogy," "Murder City" and "See the Light." A smattering of songs from their other albums include [what became a personal favorite] "Minority," "Warning," "Hitchin’ a Ride," "Good Riddance (Time of Your Life)," "Nice Guys Finish Last," "Brain Stew," "Jaded," and "Geek Stink Breath."

All of the songs are pretty good, though you might be surprised with some of the words. I know I was. They are quite the anti-establishment group and most of their tunes involve protesting the government or society or something like that. Even if you know the general tune, you probably don’t know all the words. In a lot of ways, the lyrics are pretty darn clever.

Gameplay is pretty much exactly like you expect with Robkband, which is good and bad. I guess I kind of wanted to see something a little different, but then again, the format is the format and it obviously works. I guess I’ll have to wait till Rockband 3 and the addition of keyboards to taste something really new.

I have to give credit to Green Day on one thing. Anyone who wants to follow The Beatles has got some brass balls. Is Rockband Green Day as good as The Beatles? No. Not even close really. But only Green Day (or perhaps The Rolling Stones or Elvis) would have a deep enough catalog of hits to even try. And Elvis really isn’t a group, so he would be more suited for a Karaoke title I guess.

But after the Beatles, the graphics for Green Day are sadly disappointing. I had high hopes watching the intro, with a hot chick on a bike tossing a heart grenade at monsters closing in. But once the game actually started, it was all "watch the band in concert" type of stuff. Almost every single song on The Beatles was accompanied by a visual feast. Even if you started out in a dingy studio, you would quickly end up under the sea in an octopus’s garden or floating on a psychedelic balloon with the clouds forming words and pictures behind you. I’ve seen people fail out because they got distracted watching the amazing graphics behind the band with The Beatles. You will be in no such danger with Green Day. There are three venues that are important to the band’s history, but I’m not in the band, so they were just arenas to me, like all the others I’ve seen in many Rockband, Guitar Hero and Karaoke games.

I will say that Billie Joe Armstrong, Mike Dirnt and TrÃ© Cool, the band’s members, all looked very realistic right down to their stage movements and presence. My friend Alison confirmed this by drooling while we played.

Obviously if you are a huge Green Day fan, getting this is a no-brainer. But surprisingly, even non fans like me can probably find a lot of enjoyment with this title. Green Day brings a much needed punk-vibe to Rockband, and gives it a modern counter to Guitar Hero’s Aerosmith and Van Halen. While not as great at The Beatles, Green Day proves a solid entry in the music game genre. It earns 4 and a half GiN Gems for the band to put on the shelf beside their Grammy.