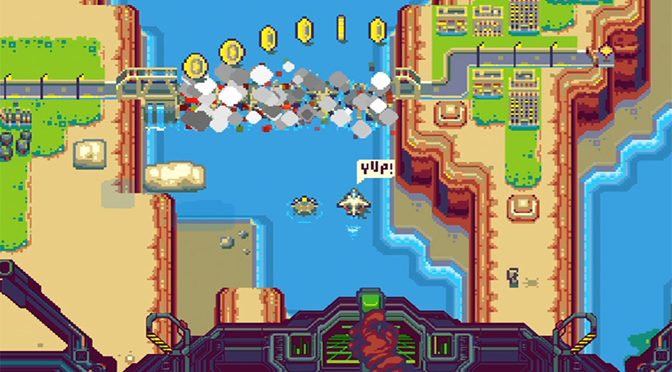 A game that only uses two buttons has no right to be as much fun as Bridge Strike is, but after vowing to play just one more level, I consistently wound up playing another 10. It’s a game that’s simple in premise, execution and presentation, yet somehow draws you in and taunts you with the possibility of a better score. 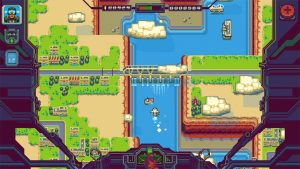 Bridge Strike is exactly what it says it is: You blow up bridges. A top-down, vertical-scrolling vantage point has you piloting a plane (or some other unlockable aircraft) while shooting missiles at bridges, enemies and obstacles in your path. This isn’t a rapid-fire vertical shooter, though. There’s a small gap in firing time with every shot, meaning you have to pick your targets with an element of strategy.

Each mission tasks players with completing an objective as efficiently as possible. That might mean destroying every bridge in a level or taking out a set number of enemies, with higher scores and avoiding obstacles resulting in a better rating.

Players also have to be conscious of their fuel, which can be refilled by slowing down over a friendly aircraft carrier. However, trigger-happy, twitchy players (like yours truly) can accidentally destroy them with ill-placed shots. Repeatedly. 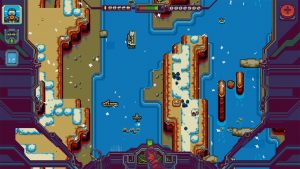 As levels become more complicated, Bridge Strike forces you to react more quickly and keep track of larger numbers of moving objects on screen. Interestingly, enemies don’t actually shoot at you, meaning if you get hit, it’s because you flew into something or failed to avoid an enemy.

Slower moving enemies like helicopters are easy to avoid, but in the later levels, rockets on the edge of the screen fly across horizontally, forcing you to adjust your speed. Jets can also zip from off-screen, and despite there being a clear warning indicator, they can be a chore to avoid. 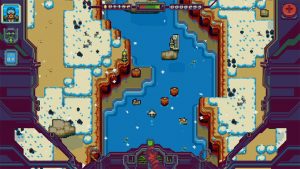 Even thunderstorms become an issue, and distinguishing which clouds are charged with lightning from the ones that are harmless can mean the difference between a perfect score and hitting restart. The use of cloud cover also cleverly masks hazards in some levels, requiring players to peek ahead before the danger is obscured.

Level design is nicely complemented by the game’s classic pixel art style, giving a retro feel to a game already brimming with nostalgia. The game’s soundtrack also adds to the retro feel, and it’s easy to imagine Bridge Strike being played on an old arcade cabinet. 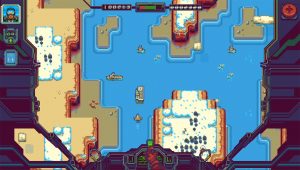 There are a number of aircraft to unlock, including some novelty ones like a UFO, but they all play similarly. There are slight variations in speed and movement, but for the most part, Bridge Strike is a game that requires skill and a whole lot of willpower to step away from. Getting a perfect rating on each level can become an obsession, and for a game that’s as easy to pick up and play as this one is, it’s just as difficult to put it down.

Bridge Strike gets 3.5 GiN Gems out of 5 for good, simple fun.