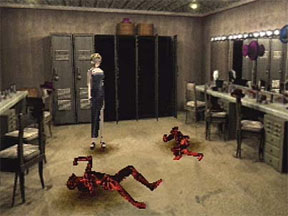 A Classic Comes To The PlayStation Network

So Parasite Eve just hit the PSN a few months ago and wow was this a blast from my past! I can’t even think of the last time I pulled my PS2 out and sat down to play this game. It’s been far too long though.

Parasite Eve was originally released for the PlayStation back in 1998. I didn’t end up playing it until I dug it out of a bargain box in 2003 though. Still I have a lot of fond memories sitting in front of my TV at night afraid that I wouldn’t be able to beat the next boss. This is one of the things that made this game stick out to me as a kid. Instead of being scared of the creatures themselves in the game I was more scared about losing. Why might you ask is this? Well because this game is so dang freaking hard!

Now I understand that it’s a Survival Horror RPG but holy cow did Square go out of their way to make sure I would struggle for hours just trying to stay alive. At first I thought that maybe it’s because I wasn’t as good at games when I was younger. So this time around I felt it might be different, and boy was I wrong. I know I’m ranting about the difficulty of Parasite Eve but I just want to make it clear that I love this game. It was the insane difficulty of Parasite Eve that made me love it so. It’s kind of like those people who play Ninja Gaiden 2 on the hardest difficulty. Sure they’re mad at the game while playing it but they are also having the time of their lives with the challenge.

The greatest aspect of Parasite Eve though is its story. I know this doesn’t come as a surprise to anyone since it is a Square game but Parasite Eve really went beyond the normal storytelling for Square. It isn’t some kind of fantastical world where heroes are dressed in flamboyant outfits and the antagonist is secretly your father or anything. Parasite Eve was a much more down to Earth kind of game.

We follow Aya Brea, a New York cop who is watching a play when suddenly everyone around her begins to spontaneously combust. While this is happening, the woman singing on stage begins to transform. Her arms start to grow in length, she begins to float above the ground, and her skin complexion pales. We’ve seen our first glimpse of Eve and Aya is going to figure out what exactly is going on.

Okay so that may not have sounded down to Earth but I’m trying not to spoil anything here!

Gameplay in Parasite Eve is a little bit different than what has become the norm for RPG’s. Aya has two different types of weapons, melee and ranged. Each weapon has its own bubble grid that forms around Aya letting you know the range of your weapon. If the enemy is in your bubble they are in range. Well actually you can still attack outside of your bubble but your attack is more likely to fail and even if it does hit you’ll be doing way less damage. So let’s just assume that you always attack enemies that are within your bubble.

As noted the game is an RPG so the main focus of battling is to get experience so that Aya can level up. Aya isn’t the only thing that can be upgraded in this game though. Weapons and armor can have their stats increased through the use of upgrades in the Tune Up menu. Also Aya has her special PE (Parasite Energy) which allows her to do special attacks, heal, or raise her stats temporarily in battle. The more Aya uses her PE the better she gets with it as well. Also PE regenerates over time so don’t be shy about using it.

Graphics in Parasite Eve haven’t exactly aged well over the years. In fact by modern day standards they’re pretty bad. That’s not really the fault of the game though. In 1998 Parasite Eve was one of the most amazing games there was graphically speaking. Still this is a PS1 game and anyone buying it should know what they are in for.

Audio in the game is good. Background music while walking through an abandoned hall is creepy and the battles had a strangely happy yet sad sounding beat to them. Voice acting is pretty much nonexistent as well. Unless you want to count Eve singing opera music but I think that more qualifies as the music in the game. Yet again though the game was released on the PS1 and bigger RPG’s didn’t have enough room on the disc to include voice acting.

More important than anything else about this new release of Parasite Eve to the PlayStation Network is that the game has now become mobile. Sure I guess if you had a PS One back in the day you could have called it mobile but that pales in comparison to the mobility of a PSP.

I’m ecstatic that some of these great PS1 titles are finally finding their way onto PSN, now if only Square would release Chrono Cross to the PSN in America so I would finally be able to play it all the way through again (my disc 2 has a scratch).

Parasite Eve earns itself 4 GiN Gems out of 5!