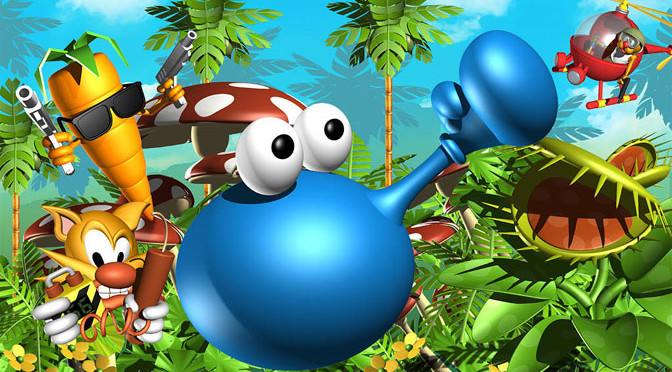 I have to confess that these days, when I think platformer, I think of a game to play on my phone while the oil is being changed in my car. So when Putty Squad arrived for review, I wasn’t super excited about it. After all, what’s the point of playing a platformer on a console? Wasn’t my shiny, new PlayStation 4 worthy of more meaty play?

Luckily for me, I was suffering from a kind of mass delusion that mobile gaming apps have done to us. Putty Squad on the PS4 is so much more fun than any phone game. I had forgotten how the limited controls of mobile gaming on phones and tablets limits gameplay as well.

Putty Squad on the PS4 was like reawakening to the joys of a platformer that allows for more than just tapping and swiping. It’s glorious. Granted this isn’t a new game, it’s a retrofitted gem from the past, sent here to remind of us of the joys of platformers. The graphics, of course, are upgraded. They are colorful, cartoony, and cute. You’re smiling about them as soon as the game starts.

The music, unlike so much app music, is neither insipid nor maddening. Not once did I turn off the sound while playing, which is fairly standard for me on most game apps. The voices in the game are funny and it’s offered in a bilingual version.

Gameplay is where Putty Squad really stands out. All the buttons on

the controller do something. It’s joyous. Your putty can hop, drip, inflate or punch and you actually need to do all of those things at various points in the game. There is a tutorial on how to play. There is a map mode. A MAP MODE, on a platformer. Bless them. And you can collect stickers. Who doesn’t like stickers? Naturally, you can look through your sticker book whenever you like. Lovely.

The goal of Putty Squad is to rescue imprisoned putties by finding and absorbing them. You can absorb other fun stuff like nitro and you can call for air support to take you around the levels. You can even pick up shields. I would prefer it if the baddies in the game weren’t pups. Yes, at the end of every level it tells you how many pups you killed, which I have to tell you, as a dog person, upset me every single time. But I got over it. At least the cartoon pups have helmets on and don’t really look like dogs, but still. Come on System 3, you couldn’t have picked a less appealing bad guy? Are you guys all cat people?

that playability is infinite. Each level is timed so you can compete with yourself for better times or you can compete with others on global leaderboards. Modes include Marathon and Challenge. With all these options for replay along with a reasonable price tag, Putty Squad scores high in value.

Overall, Putty Squad is a hit. It’s a joy to look at while also being charming and funny. It’s a challenging game, but the tutorial makes it easy to learn. All the gameplay options make replay easy and fun so you get a lot of game for your money. If you’re a platformer fan that has forgotten how fun it is to play one on a console or a real mobile game system, check out Putty Squad. You won’t regret it. Putty Squad earns 5 out of 5 GiN Gems.