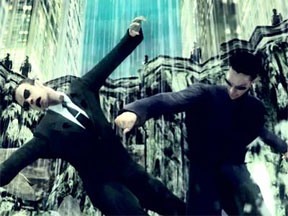 The Matrix: Path of Neo

Are you "the One"? Not so sure? Then let me leave you with two choices: If you take the "blue pill," you stay in Kansas and you never find out whether the GiN crew gives this game the thumbs up or the thumbs down. You take the "red pill" and we break this game down brick by brick and find out how deep the rabbit-hole goes. Either way, I should probably have let you know by now that the Matrix already has you, so trust me. Just do yourself a favor and follow the white rabbit.

It’s been a long time coming and perhaps it’s even a little on the overdue side, but finally loyal followers of the hit Matrix trilogy will get a chance to stand in the shoes of Thomas Anderson and relive his fantastic journey from start to finish. The Atari/Shiny Entertainment Team proudly presents the eager masses with "The Matrix: Path of the Neo." Does the game, however, live up to the hype of the big screen series or is it just disappointing subject matter that should probably be left in the hands of "agents?" Let us patch in.

Wow. How I do hate to start a review of this caliber out on a bad note, but graphically this game is lousy at first impression. I must say I was a bit shocked the first time I laid eyes on the actual game play scenery. A "crude" display of visuals, it’s hard to look past the fact that our infamous Neo is unjustly portrayed as a pointy-faced, anorexic, overly stretched, poorly-dressed action hero. Even more unnerving is the roughly digitized and lackluster environments that surround him. The game just looks nothing like what we might know or portray in our imaginations as what a Matrix game should be. Even if I could "bend a spoon" with my mind I don’t believe I could make these graphics any better to look at.

However, before we give the graphics department a huge thumbs-down, I am compelled to let you know that the visuals do actually improve dramatically about half way through the game. Yes, you heard me right. Once you play through Chapter 1, which is essentially the first Matrix movie of the series, everything from characters to background scenery gets a serious graphical upgrade. Suddenly, Neo is more round-faced and accurately proportioned and his wardrobe is upgraded to the trademark bad-boy trench-coat/dark sunglasses get-up. Visually, you begin to recognize actual in-game environments from the movies as the game seems to shed its digitally rough look and blossom into a very smooth and graphically credible 3D action adventure.

But, hey it’s not all about the graphics right? The cool thing about the storyline this year is that while you inevitably reenact a majority of the entire trilogy, there are a lot of cool "between-the-scenes" missions that add to the main storyline and keep things from becoming predictable. Now while hardcore Matrix fans of the series might appreciate a storyline that more accurately follows the series, you do have to admire the script-writers attempt to broaden an already dynamic plot. By the time the game is over you will have felt like you’ve reenacted the "director’s cut" version of the movie which is surprisingly a nice little change of pace.

So what’s it like to be Neo? To be quite honest, being Neo is a bit awkward and challenging at first in terms of controls. You spend the first few missions of the game in a mock version of the Matrix learning "kung fu" and applying your newly acquired martial arts skills in various combat situations. You learn basics like sneaking up on unsuspecting opponents and choking them out and then quickly advance to multiple-enemy encounters, aerial maneuvers, and weapons training.

Everything gets thrown at you pretty fast. A lot of the buttons you use for one move might also be the same buttons for another. A lot of the moves in the game only vary by the direction you hit on your thumb pad, a simultaneous conjunction of two buttons together, or whether or not you’re in "focus mode" at the time of execution. Your training can only be described as intense and extremely extensive.

Once you finish your crash course in Kung Fu, you’re immediately thrown into the action following your initial visit to the "Oracle". Your first chance to show off your skills in battle will most likely be a bit tacky and possibly laughable as you attempt to apply all that you’ve had to learn so quickly from your training modules.

The action is fast-paced and more than often you’re extremely outnumbered so you’ll most likely keep your hand-to-hand tactics to basic kicks and strikes and rely heavily on your guns to survive. However, you will have those occasional moments where you successfully pull off a stylish move or combo and those are the moments that inspire you to practice and delve deeper into your training to become the ultimate warrior.

As you progress through the first chapter of the game, you’ll begin to become more familiar with the controls and how to quickly disperse those multiple enemy encounters. You learn how to use your special "focus ability" to slow time down and pull off those killer combos and you stop relying so heavily upon your guns and more on your martial art skills. Between missions you are rewarded with even more new moves and abilities to add to your already lengthy list of commands to help strengthen your attacks.

The most beautiful thing in the midst of all the drama and action is that players begin to experience for themselves Neo’s gradual evolvement into "The One." Much like the movie, the game throws players into a highly hostile and irrational environment. There is no time to think and no time to plan. There is only time to act or react. Your instincts immediately kick you into survival mode. In the beginning you spend much of your time running from agents, dodging bullets, and ducking for cover. The world around you seems larger than life and you don’t fully trust that the knowledge you have inside will get you out of this hairy situation.

But then, slowly but surely, it happens. Everything that’s been injected into memory slowly begins to click in your head. You begin to understand the controls with each passing mission. You learn to use the right strategy for the right situation. You stop running from agents, you stop ducking for cover and dodging bullets becomes like second hand. Your confidence begins to build and sometimes you even amaze yourself. More and more you begin to believe. You begin to believe in yourself and what you can do when duty calls. You begin to realize your true destiny: To become "The One." And let me just tell you that being the One is without a doubt the ultimate Matrix experience.

To become the One you must master four "circles of combat" to tap into Neo’s ultimate moves and super abilities. Once you learn all of the moves within a circle of combat you graduate to a higher circle where you learn more devastating variations of moves from the previous circle. Once you reach the last circle, your true powers will be realized and the fate of the world will rest in your hands. The question is do you have what it takes to best Agent Smith in the final battle and bring a long-awaited peace to Zion?

Every player will have to answer their own destiny for themselves, but I can promise you this: Morpheus was right. When the time comes, you won’t need bullets. There is absolutely nothing, and I do mean nothing that you can’t do in this game that you haven’t seen in the movie. It’s all here. You can run up walls, stylishly disarm enemy soldiers, perform devastating aerial attacks, execute various killer martial arts combos taken straight out of the movie, masterfully handle a fine assortment of melee weapons from swords to morning stars, dual-wield guns, and so much more. Once you tap into your ultimate powers you can do literally anything you want to do from using "telekinesis" to hurl loose objects around the environment at enemies and stopping bullets in mid-air and reversing their directional path to healing the wounded, using "code-vision" to see through walls and find hidden entrances and even flying. The game play leaves nothing for the wanting. If you’ve seen it on the big-screen you can do it in the game and then some.

And awesome game play engine is backed up by a very solid sound track. Much like "Enter the Matrix", the game uses the real voice-overs from the movie and the music masterfully rides the action all the way up to its climatic moment. In between missions, you’ll be treated to various cut-scenes from the movies that help bring the storyline to life. Everything from game play to sound is very well put together and it all ultimately leads to a very fulfilling and fun experience for fans.

The bottom line is aside from a roller-coaster graphics engine, Matrix: PON is without a doubt a must-have for anyone who is even remotely fond of the Matrix series. There is plenty of in-game action and memorable moments, a familiar compelling story line with some spin to it, and more importantly a chance for hardcore fans to finally experience what it’s like to the One. Needless to say Path of Neo does not disappoint. Even "haters" of the first Matrix game will have to turn a brow up at this one. A solid 4 Gin gems is my final verdict. Now if you’ll excuse me, I’m gonna go do my "Super-man thing."