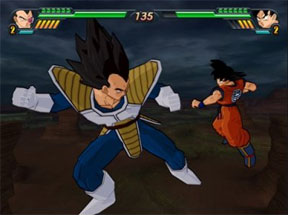 A few titles in the past have barged through my cynicism, most notably Tekken, but for the most part I have kept the fighters away from my consoles as though they had contracted a vicious disease.

Recently, Dragon Ball Z Budokai Tenkaichi 3 made it past my radar and into my Wii, and after playing it, I came to see how far the fighting genre had pushed itself since my ten-year hiatus. It wasn’t that far, but there were a few interesting knick-knacks thrown in to make the pill go down easier.

First off, the whole DBZ phenomenon couldn’t have passed me up any faster than if it were sporting rocket engines, so I had no idea what I was getting into when I started the third installment of this series. On many accounts, I still have no idea.

But you don’t have to be, um, Son Guku to play a game, so I gave it a shot and here’s what I found: I was better off keeping away from fighters.

Truth be told there are some interesting things going on in DBZ to warrant such a long name, but the main event comes by way of the arena battles. Here, players fly around and pound each other with some fast fighting moves. There can be anywhere up to four different characters on the screen at any given time, but as the game continues, as with most fighters, the actions become repetitious.

Of course, the addition of flying was a bit refreshing. And there are a bunch of change ups in the fighting techniques, if you really want to sit down and learn all the subtle jaunts and attacks that the Wii remote provides, but you can only expect so much when everything else seems so worn after a short time in the game.

There are a number of different modes to look into as well, but if you look too close, you’ll tag them as the same basic setup as the main "Ultimate Battle" mode. And while the minor differences may be enough for those gamers looking for a reason to continue playing, but for the majority of us, it just won’t do the trick.

I’d say the strangest thing about this game is that it’s been done before, and not too far back. It seems that one of these DBZ fighters pops up every year, so how much could really be different? If what I’ve read from other reports is correct, not much at all.

Still, the character setup is fairly impressive with 161 different opponents to choose from, and the graphics are really fetching, completely recreating the visual feel of the cartoon, but this is hardly the saving grace that this game needs to jump out of its target demographic, and that’s where the truth of this game lies.

DBZBT3 is a game made for the fans. This game had its players long before it hit the shelves, and maybe that’s enough for them.

It’s certainly been enough for me.