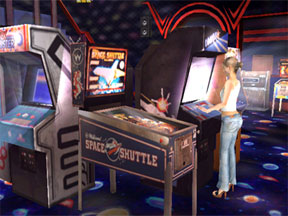 Pinball Hall of Fame: The Williams Collection recreates eight of the best tables given to us by that brand. Table goals, step-by-step instructions, and a recreation of each game’s flyer provide a better idea of the goals in each game, and the faithful, virtual reconstruction of each title is done with such detail, you can instantly tell the level of care that went into making this game.

But can a console-based pinball medley keep modern players happy when there’s still so much stuff to blow up in the gaming world?

Well, since pinball is timeless, of course it can. Or, as Gorgar would say, "Me got you!"

Pinball certainly takes the prize for being one of the mainstays in the gaming world. Whether it’s following the rules and challenges set up by the table’s designers, or just trying to keep the ball from falling between the paddles, everyone finds a draw to the pinball machines of this world, and every now and again, a developer has some success bringing the genre to a virtual environment. Crave Entertainment’s Pinball Hall of Fame: The Williams Collection is an excellent example of this.

While some tables in PHF are more difficult than others, such as the ever-frustrating Jive Time (1970), all the different tables have their own little strategies and features that make them enticing.

Some have decks cluttered with rails, bumpers, spinners, and targets, while others have nothing but open space through which your ball free falls, but with each game, several challenges and triumphs are to be had.

All the tables in PHF are very detailed, the game’s physics engine plays well, and the controls on the Wii are comfortable, but most importantly, beyond all these pluses, is the fact that there are no glitches in the game.

I say this because a smooth playing experience is all you can really ask for in a straightforward game like this, and PHF has exceeded the quality goals in every aspect.

If I had started up the game and found that the ball often passes through the paddles, or the ball’s reaction to the bumpers were off even slightly, PHF wouldn’t have resided in my Wii for as long as has been, but the gameplay is sleek, simple, and effective, making this game a definite keeper.

Aside from delivering some interesting and responsive tables, PHF has also set up goals, challenge modes, and a few unlockable extras, though these won’t make you jump out of your seat and applaud your television screen.

No. High scores and nostalgia are PHF’s bread and butter, so study up on what you’re getting into before you slide the disc into your Wii, because at $30, this is definitely a blast from the past you’ll want to try out.

And who knows, maybe someday, after days of hard work and dedication, you’ll beat a high score and hear those magic words every pinball player strives to hear: "You beat GORGAR!"