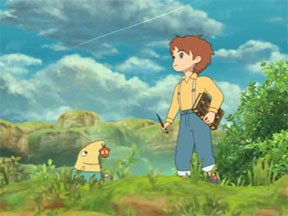 Ni No Kuni: Wrath of
the White Witch

Thanks to the Studio Ghibli connection, Ni No Kuni: Wrath of the White Witch has soared up the games charts and left publisher, Namco Bandai struggling to meet demand at retail. Such is the lure of the animation genius of Studio Ghibli, who is often described as the ‘Japanese Disney,’ but that does it a disservice. Famous for charming and sometimes heart breaking films, such as Spirited Away, Graveyard of the Fireflies and My Neighbour Totoro, Studio Ghibli are masters of entering the world of a child without making it saccharine and trite. It is this, combined with the expertise of seasoned JRPG developer LEVEL 5 that ensures Ni No Kuni isn’t just another cutesy Japanese grind fest.

Our hero is a boy called Oliver, who lives in Motorville, a fictionalised version of 40s or 50s America, complete with friendly hardware store owners and white, picket fences. In the first 30 minutes of play, we’re swept into Oliver’s beautiful and happy world, only for tragedy to strike. At this point, the real adventure begins and you also realise that this is a game that’s not afraid to tackle dark, emotional themes, despite its child-friendly aesthetic.

Oliver’s guide is Drippy, king of the fairies, but don’t expect any wings or pointy ears. Instead, we’re given an odd little character with a lantern hanging off the end of his nose and a fresh from the Valleys, Welsh accent, voiced by a Welsh actor. As with all Studio Ghibli projects, special care has been taken with the English language dub. Drippy’s Welsh accent mirrors the rural Osaka accent used in the Japanese original, ensuring almost nothing is lost in translation. Drippy could easily have been an annoying Scrappy-doo style character, but instead he is a genuinely funny and useful side-kick, guiding you through the game mechanics.

For the first couple of hours of gameplay, it’s like living in a Studio Ghibli film, which for me is an absolute joy and a dream come true. However, some gamers may just want to get on with playing the game and do more than just press X now and again. Stick with it though, because the game slowly unravels before you, revealing a rich world, captivating story and deep gameplay.

Combat uses ‘familiars,’ which are Pokemon-style creatures who fight for you. Although the battle mechanics are introduced slowly, they can become overwhelming when you meet your first boss. Familiars can be swapped in and out of battle. As they each have their own strengths and weaknesses, this adds a strategic element and some depth to combat. You can only use a familiar for a fixed period of time, forcing you to change characters, until they charge up again.

Pressing L1 pauses the game, while you select your familiar. Once in battle mode, you use the d-pad to select the type of attack and time if you time it right you get a bonus. Switching to Oliver allows you to heal your party and access provisions to top up your health and magic bars. Foes also drop orbs, which can boost your stats, but they can be difficult to catch in the heat of battle.

Boss battles really spike the difficulty up, which can be frustrating. However, I found that you just need to take your time and stick to a winning strategy. The good news is that out in the world map, lower level foes run away from you, so no Final Fantasy VII style random encounters with level one chars, which just slow your progress from A to B.

Familiars also serve as pets. They need to be fed with sugary snacks and you can upgrade their weapons and armour by buying items in town shops. With 300 creatures to collect as familiars, this is an element of the game that could become an obsession. Each one can be upgraded and learns new moves as they level up.

When you aren’t in battle there’s plenty to amuse you while wandering through stunning, magical forests or helping townspeople and meandering through cobbled streets in fantastical cities. In addition, the side quests offer you a chance to make some extra cash and a good excuse to get out and explore. And as the game progresses, Oliver can dabble in a spot of alchemy. This allows you to craft your own food, weapons and other items, giving you a boost in combat.

Ni No Kuni isn’t going to win any prizes for most original story idea, but it takes the standard fairy tale format of small boy destined to save the world and defeat an evil queen, and delivers its own brand of charm. At times the dialogue is a bit stilted and repetitive, with Oliver acting like a bit of a moron, but this may be a matter of the team trying to cater to a younger audience. That said, Drippy’s witty one-liners are enough to keep the grown-ups chuckling.

I can’t go any further without saying that Ni No Kuni looks absolutely gorgeous. The team has managed to create seamless animated scenes that are worthy of a cinema screen. The game moves between the animated glory we’ve come to expect of Ghibli, to cel-shaded polygonal gameplay graphics that allow us to move through the beautifully designed world.

The heart-swelling, fully orchestrated score only serves to add to the cinematic feel of the game. Composed by Ghibli favourite, Joe Hisaishi and performed by the Tokyo Philharmonic Orchestra, the music more than matches the visuals.

Ni No Kuni does suffer from difficulty spikes and the real-time combat could alienate some gamers. In addition, as you move into the second half of the game the frequency of the Ghibli-animated cut-scenes drop off a little and voice-acted dialogue is replaced by titles you click through, which is disappointing. These are minor niggles, in a game that delivers a moving and cinematic opening, varied and beautiful locations, deep gameplay and charm in equal measure.

At a time when game violence is in the spotlight once again, Ni No Kuni is an awe-inspiring example of how much more games have to offer to their players.