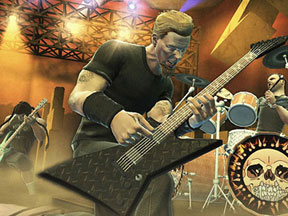 I was happy to see that the second band specific title released was for another band that I was a fan of. The first being AeroSmith and now we have Metallica. All of the blistering guitar riffs and pounding drum beats that made the band so popular are placed in game format for everyone to enjoy.

The game has the base formula of Guitar Hero: World Tour and adds some features to make this one distinctly different.

The first new feature is the addition of the second drum petal, which was included with some pre-orders and is definitely worth having.

The second that I noticed was that the compatibility was there for my Lips wireless microphones! I was pleasantly surprised by this fact!

The new additional drum petal is needed if you dare to attempt the expert + drum difficulty option available in some songs. I suggest trying it in practice mode first. This feature will give you a note to note translation of the song and is sure to cramp up some legs.

The song list is packed with Metallica content, of course, and other bands added to the game hand picked by the members of Metallica themselves. I was happy to see "Turn the Page" by Bob Segar, "Tuesdays Gone" by Lynyrd Skynyrd, along side my Metallica favorites such as "For Whom the Bell Tolls," "King Nothing," and "Seek & Destroy" to name a few.

The one song that was rumored to be included was "Anastasia" (Pulling Teeth) a bass solo. Unfortunately it is not on the game, but this is one reviewer that so wishes it was. I can always hope for DLC content to include it at a later date. The song list is a total of 49 songs on the disk.

The DLC of the Metallica Death Magnetic is compatible, if you previously purchased it. I would have liked to see more songs come with the game but understand cause it’s a band specific release.

As mentioned earlier, the extras from World Tour are in this game too such as the Recording Studio, Rock Star Creator, GHTunes, Head to Head, and a few more.

The band donned the motion capture suits for the game and that is one of the reasons why the game is so visually appealing. Some of the facial expressions make me wonder if someone cut the cheese during this process.

There are several videos included with the game showing the band in the suits and one in particular I would suggest watching of Lars goofing up on "The Shortest Straw."

One of the new features to this game that I enjoyed was the addition of song details. Here you are able to see the song lyrics or Metallifacts, a special mode to watch with pop up facts about the band and/or song. It is a way to really test your knowledge of the band and why certain groups are included with the game as well.

I would highly suggest buying Guitar Hero Metallica if you are a Metallica fan, or if you are looking to add something new to your Rock Band format, as in the second foot pedal. The game is loads of fun to play and darn challenging on the drums. I’m still playing this to date and plan to keep on rockin’ for some time to come.