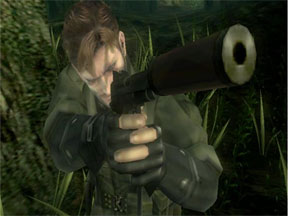 I was happy to be able to catch back up with Metal Gear Solid. Growing up I watched my brother play the original one, but since I was a Nintendo person until Xbox came along, so I missed the Metal Gear Solid series. In fact, of all the Metal Gear series I missed, I wanted to play Snake Eater the most due to the tactical style of gameplay.

Once Metal Gear Solid: Snake Eater 3D started, it went into its intro movie and already I noticed the graphics were less than desirable. Withholding my judgment I continued through the movie, which took place inside of a plane.

You watch Snake get a mask on and put his trademark cigar down. Then some unknown man inside what looked like a command center said, "The first HALO jump." This caught my attention because back in my basic training in the Army we talked about HALO. What this stands for is High Altitude Low Opening. The army has special school for this very jump.

Anyway, Snake takes his leap of faith from the back of the gunship and began his free fall towards a dense forest. Once he finally opens his parachute he starts his landing which involves going through trees. Before he hits the ground his pack his ripped off of him.

Once he lands he’s contacted by the unknown man who used the codename Major Tom. Major Tom gives you a full briefing on what your mission is and how important it is. Your mission is to sneak through the forest and recover a Russian scientist who is developing an unknown weapon against his will.

When all the conversations were said and done I finally got to play. At first the controls seemed a slight bit awkward, but I got used to them…sort of. I climbed up a tree and recovered my bag and that led to some more conversation. Finally, I was all clear and after moving for more than five feet I learned one of the biggest issues, the camera.

While camera movement isn’t bad, the fact is the screen is very small on the 3DS and then they throw Snake in front of it. Combine that with the already average graphics and it’s a frustration waiting to happen.

Although to be honest, it didn’t wait too long. My first encounter with enemy troops went awry, over and over again. Not being able to see past Snake often lead to me missing a soldier standing right in front of me. On other occasions I’d take down a soldier and I’d start getting shot at, and because of the tiny screen and average graphics, I couldn’t see who was shooting me.

Many times throughout this game I had to put it down, go outside and take a walk. Metal Gear Solid really stretches your patience as far as it will go.

Now, once I was able to get used to the flaws, the game was quite enjoyable. If you love games like Tom Clancy’s Splinter Cell then you’ll love this game. You get a good look at what it’d be like to be dropped behind enemy lines with no guns or backup.

For anyone big on these type of games, it should make the middle of your list. However, Metal Gear Solid: Snake Eater 3D really requires a Circle Pad Pro to get the most efficiency out of the game, an inexpensive peripheral for the 3DS, but one that is really needed to help wrestle the camera under control.

The fact is that the Metal Gear Solid series is great, but might not be a great fit for the 3DS. All of the graphical problems I had only got worse once 3D was activated. The game wasn’t really made for the 3D, just retrofitted into it, and it kind of shows.

Metal Gear Solid: Snake Eater 3D still gets an above average score of 3.5 Gin Gems overall, but note that there are better ways to experience the game than within the limitations of the 3DS platform.