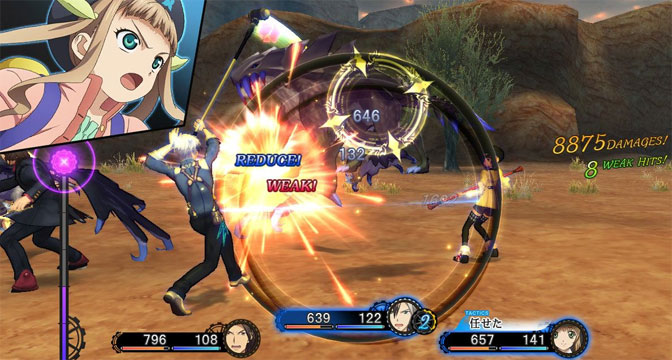 Tales of Xillia 2, if you couldn’t tell, is the successor to last year’s Tales title, Tales of Xillia. Following the end of Xillia 1, a lot of questions were left open, such as whether or not Spyrites will actually be created and keep the worlds from becoming barren wastelands, devoid of life. These questions are brought up extensively in Tales of Xillia 2, while a whole new, and much more interesting plot line centering on the new main character Ludger and the whole Kresnik family, is also mixed into the story presentation. Is Xillia 2 a worthwhile sequel, or does it borrow so much from its predecessor that its now in debt? Let’s find out.

The beginning of Tales of Xillia 2 is little more than a train wreck. No, literally, the main character  Ludger Kresnik has a horrible first day in his job as a train station cook as he tries to foil a train hijacking, gets sucked into another dimension, is forced to fight an otherworldly version of his own brother only to be brought back to his own dimension in time for the train to crash and severely injure him. The medical treatment from the train wreck is what hampers Ludger with a hefty 20,000,000 gald debt that you are forced to pay throughout portions of the story, and from these humble beginnings Ludger’s story begins (well, it’s no Enron scandal but it’s better than him having amnesia), and evolves into a dimension, and sometimes time, hopping tale that shakes the very universe to its core.

The debt system is actually one of the largest problems with Xillia 2, so we’ll touch on this more since it’s an extremely intrusive little system: Every single time you make an amount of gald equal to your next debt payment, you’re immediately contacted by Nova, your friendly, neighborhood debt collector. This may not really sound like that big of a deal, but if you were out in a farming run to collect enough money to purchase better equipment for your whole team, a poorly timed call from Nova can ruin your intended use for those funds. Gald can be obtained by winning battles, or more quickly by going to the job bulletin and completing various side quests which consist of farm X of a certain item, or go kill X of a specific enemy, each of which are quite grindy. There are also elite monsters to kill which have sizable gald bounties on them, and while those fights may be harder than the average, they’re the easiest way to get the next payment ready so you can continue on with the story.

Unfortunately, that still doesn’t keep it from being irritating that the game dangles a sign in front of the player that reads, “Eager to see what’s next? Go farm 25,000 Gald in locations unchanged from Xillia 1 and come back to see.” It’s like game theory meets scientology to form a large amount of shameless padding. If you cannot tell, the story is actually extremely engaging, even more interesting than the first iteration, which makes being gated as you are several times throughout the story an annoyance until late in the game (around chapter 14 or so) when the debt no longer requires payments due to story developments, so you’re free to grind for end-game equipment and items.

All of the playable characters from Xillia show up in the sequel and are able to be controlled by the player. While Ludger cannot be removed from the party at all during the main story due to his unique Chromatus ability being required by plot, players can use their favorites from the first game, plus the primary antagonists of Xillia, Gaius and Muzet to boot! With so many recurring characters it should be fairly obvious that many of the combat mechanics are the same, as players will still use combos formed by mixing standard attacks from the cross button with special attack arts from the circle button, while the computer will control 3 other characters to support you with strategies you set for them, yourself.

The combat system in Xillia 2 is a further evolution of Xillia’s, in which it inherits the Skill Link system of its previous entry’s Dual Raid Linear Motion Battle System, but then also gives you a main character who can swap among three different weapons in dual blades, a sledgehammer and dual pistols (which is similar to the style shift of Tales of Graces f). Using these weapons, Ludger can set up for even more intricate combos on top of having his own special Chromatus form that basically pits him, solo, against all of the enemies in a super-powered state. Xillia 2 maintains fast-paced combat that wouldn’t be out of place in a fighting game and even managed to add more.

As tends to be the case for sequels, Xillia 2 borrows a lot from its predecessor. Actually, Xillia 2 borrows so much from the first Xillia that it actually took each whole location from the first game and plopped them into this one, with even most random loot drop locations being unchanged. There are a few new areas in Xillia 2, but they’re in the sheer minority- much of a Xillia 2 player’s time is going to be spent roaming through locations previously seen, either discovering plot details for the new game, or repeatedly grinding for gald, experience or elemental ore.

The elemental ore is actually a new feature of Xillia 2, as the Lilium Orbs from the first game were eliminated and replaced with new Allium Orbs that must be set with extractors to gain points in each element. It seems relatively confusing at first, but your characters gain skills by accruing elemental ore, and the extractors you equip to them determine which elements you’re building on, and subsequently, which skills you’re working toward. It’s a lot more straightforward than Tales of Xillia’s system, with skill and arte gain being practically on auto pilot, and it gets better as the game goes on since later extractors have multipliers and accrue more than one element at a time.

The English voice acting in Xillia 2 is just as solid as the first iteration and consistently aids in bringing the story of this game to life for the player. Many cutscenes play out just like a cartoon would, and the skits are usually full of lore building information or general humor from the interactions of the main party. Oftentimes, players will get the option to answer for Ludger, in both cutscenes and skits, and many of those choices will increase or decrease your affinity with characters from the Xillia 1 cast. Which, affinity doesn’t determine endings or anything like that, the cast just winds up giving you skill books you can’t get anywhere else and other items that can greatly aid you through your journey, so it’s always a good idea to get Ludger on your team’s good side.

Visually, Xillia 2 looks the same as its predecessor with little to no improvement. Contrastingly, the audio is consistently superb and full of life, as catchy, upbeat music pervades the game, the sound effects are always fitting and the voice acting helps bring out the emotion in almost every cutscene. Visually, however, while the game looks fine at a distance it does show its age during many of the up-close camera shots, but it’s still quite a fine looking title considering of what the PS3 is capable. As far as visuals and sound go, if you saw or heard Xillia 1, you know exactly what to expect here.

Aside from the main plot, however, there’s actually plenty of exploring that can be done as Kitty Dispatch, a menu-based system in which you send cats you find on your journey out on treasure hunts, can bring you additional items, including wearable attachments for your characters. The post game content is also quite sizable, featuring a very challenging arena and large, additional dungeon that will test your capabilities with Xillia 2’s combat system. Co-op play is available again, as well, allowing multiple players to join in and help you more adequately take down foes (though, in my personal experience, it wound up being similar to playing Super Mario 3D World with a couple drunk friends, meaning it actually increased the difficulty level of the game. One of them was certain Rowen, the magic caster, was the best close-range melee character).

To summarize: Tales of Xillia 2 is a game that will easily be enjoyed by those who enjoyed the first Xillia- plot lines that were left dangling worse than a participle are finally touched upon and resolved in the sequel, and the story is just ridiculously good, and this is coming from someone who didn’t like the fact that it took on a new main character. Conversely, while there is a quick reference dictionary with some CliffsNotes of Xillia 1’s story, it doesn’t even touch on some of the largest moments of character development and a large amount of information used by the cast for jokes, foreboding warnings, etc., will be lost without that knowledge. For that reason, those who have played Xillia 1 and enjoyed the story have very little to lose by trying Xillia 2 as it’s a lot more of the same plus a large amount of improvements, assuming you can deal with grinding out the pay-walls. Those who have not played Xillia 1, or did not like it at all, should stay very far away from Xillia 2 as it does very little different from the previous game, and in the non-story, non-combat aspects, may have actually taken some steps backwards.