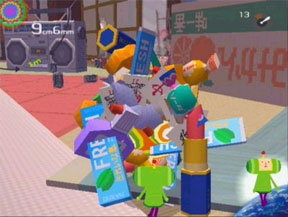 So what exactly is a Katamari? Well you see it’s a..ah…Well it’s shaped a like a um..Urhm, well you see, it has bumps all over it and the way it works is umm….Hck, I don’t know. All I know is that the title of the game is "Katamari Damacy" which translates from Japanese to "clump of souls." How do I know this? Well I have my sources. Unfortunately, the game itself does not translate so easily as the name.

Let’s not beat around the bush here any longer. This game sucks with a capital "S" and that’s saying it nicely. Even more shocking is the fact that the "great" Namco actually has a big hand in the development of this title. Perhaps it’s a big hit in Japan, but I just can’t see a game like this selling off the shelves like hotcakes, even at its $20 dollar retail value, here in the states. None the less, it is my sworn duty as a game reviewer to reveal the facts about new and upcoming titles to gamers around the globe in an "unbiased" manner and allow them to choose for themselves the games that they will add to their electronic libraries in the future.

In "Katamari Damacy", the great "King of the Cosmos" accidentally destroys all of the stars in the galaxy after spinning wildly out control during one of his ritual "super-man" routines. I know, I know that’s one big accident right? But believe me, I saw it for myself. It can be done. At any rate, the inhabitants of the surrounding planets are highly po’ed at him. However, instead of owning up to the error of his ways, he decides to take the back burner on this one and leaves the "larger than life" task of restoring the galaxy back to it’s former glory to his tiny son, known only as, "the Prince."

So how exactly do you put a star back into the sky? Well, with a "Katamari ball" of course, silly. Duh. Anyhow, the King and the Prince come up with a plan to use this Katamari ball to roll up gigantic heaps of–well anything and then launch it into the atmosphere and watch it light up like a star.

The object of the game is mere child’s play really. Players start with an odd-shaped Katamari ball which when rolled over an environment, can pick up practically anything from small vegetables to people. The goal is to roll yourself a gigantic Katamari ball of "stuff," via the "snowball" effect, within a specified period of time. As you progress through the stages you’ll be required to build larger Katamari balls within shorter periods of time. Once you have completed you’re Katamari ball, the King of Cosmos will launch your heap of mischief into the atmosphere and make it a star. And well…that’s it.

Of course, there are a few clever twists to help add to the gameplay. First off, since your Katamari ball picks up literally "anything" lying around, you’ll need to be watchful of what you add to your collection.

For example if you roll up a large pencil or any other "linear" object you’ll most likely hamper the mobility of the your ball thus making it harder to build your ball to a good size within the specified time limit. You have to be careful not to roll into large standing objects at high speeds too. Such high impact collisions can cause miscellaneous pieces to fall from you ball, negating all of your tedious work. You will also need to be on the look-out for moving "critters," other than yourself, trying to bump into you and cause pieces to fall away from your project.

Through your travels you’ll find that there are barriers impeding your path to other areas from time to time. In most cases, the answer to the riddle lies in simply increasing the size your Katamari and then rolling right over the otherwise impassable barrier or even adding it to your ball. Basically if you want to get anywhere in the game then you have to remember that "size matters."

As you clear stages, you’ll be able to keep track of miscellaneous treasures that you might inadvertently roll up into your Katamari ball. You can view and admire these items on the "object screen." On that same note, you can also take snapshots of some of your greatest work and showcase them to your friends in the "photo gallery."

Unfortunately for "Katamari Damacy," it won’t take me half the time to tell you why this game is far from being a winner and has earned itself a spot on the back shelf. To begin with, while the concept of the game is intriguing and quite original, the overall presentation of that concept is destroyed by horrid lack-luster graphics, lousy audio and extremely stagnant gameplay. On top of all that the fun in this game lasts about five to 10 minutes max. After that everything becomes extremely old and mundane. Which brings me to my next point: The replay value of this title is a big fat zero.

The bottom line? Let us put this one out of its misery quickly. Good graphics? Nope. Good audio? No way. Good gameplay? Gimme a break. Lots of fun? Sure, as long as you are NOT playing it, at least very long. Replay value? Nada.

You add all of these facts together and what do you get? One "sucky" game. Hey, sometimes you just gotta tell it like it is. It earns one and a half GiN Gems, and believe me, that is being extremely nice. Sure, Japan might embrace this quirky title, but U.S. gamers are probably just going to call it extremely lame.