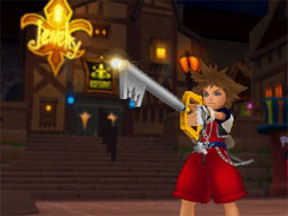 Oh Kingdom Hearts, you’ve blessed the Final Fantasy and Disney fanbases for years now with your simple yet lovable characters, your re-creation of beautiful Disney worlds, and a deep meaningful story of the balance between light and dark.

Let us start off with the games’ story. Jiminy Cricket has found a strange entry in his journal and takes it to King Mickey to have him look over it. Mickey, wanting to know more about the message decides to digitize the journal. Inside they find that it is filled with bugs and that they are unable to learn the secret of the message. So of course the beast way to handle this is to create a digital Sora to go and vanquish the bugs.

This is where the game starts getting weird.

Digital Sora has a digital keyblade that allows him to slay the digital Heartless and clean up the bugs in the journal. With that, Digital Sora sets off on an adventure to cleanse the journal of the bugs. This will have you running around worlds from the first Kingdom Hearts and basically redoing what was done in the first game, except with a few minor twists here and there.

That being said, the only part story wise in this game that matters is the very end, and to top it off the end isn’t even climactic. Instead the game ends setting up Kingdom Hearts: Dream Drop Distance, which will be out later this year for the 3DS.

The graphics in the game take a lesson straight from the story. Instead of the awe inspiring cutscenes that Square is famous for; we get still pictures of the characters that change to express emotion and movement. Square did this in another of their games: The World Ends With You. The difference you ask? The World Ends With You has heavily stylized 2D artwork that was over the top and felt just right for that style of game, not still frames of the in game 3D models of characters. Yet again I am underwhelmed.

The musical score in the game is the same score found in the first Kingdom Hearts with maybe a couple of extra added tracks. So in those terms the music is good, it just isn’t anything fresh.

The voice acting is of course good quality, but there just isn’t much of it seeing as animated cut scenes are way too few and far between.

Now to best part of the game!

Gameplay in Kingdom Hearts Re:coded is what you know and love from the other games mixed in with elements found in other genres of games that keep it fresh for the whole twenty hours of gameplay (I expect at least thirty hours as decent length for a RPG).

The Normal Gameplay – This is the gameplay that is found most often in the Kingdom Hearts series, lots of hacking and slashing through enemies to gain experience and level up. Added is the Command system that was found in Birth by Sleep. Re:coded features all news moves and combination that keep it from feeling like a rehash of the battle system in Birth by Sleep but still leaves you on familiar grounds.

The Side Scrolling Gameplay puts the character into a view from the side that plays much like older titles found on the SNES. Running along and hopping over pits, and staying ahead of a constantly moving screen while slaying heatless is what happens here. Complete with 32 bit styled graphics this gameplay was executed perfectly.

The Final Fantasy Gameplay- as the name implies – this form of gameplay is much like the Final Fantasy series. When approaching an enemy the screen will warp in the classic Final Fantasy style and Sora and his party members will be 2D sprites. Battle is turn based and enemies sit on the right side of the screen while your part is on the left. An added twist to the final fantasy formula is that when approaching an enemy there is a window of time to press the attack button again to string a combo together. This is easily my favorite of the game modes and acts as a great nod to Squares’ beginnings in the RPG genre.

The Third Person Shooter Gameplay: this mode has Sora constantly running down a never ending road while dodging blocks and shooting heartless with beams produced from his keyblade. While easily the most frustrating of the different gameplay types, it is also the worst. Unlike the normal, side scrolling, and Final Fantasy gameplay this one just didn’t feel as fine tuned as the others. It isn’t horrible, but while all other aspects of gameplay are executed amazingly this one just felt more or less mediocre.

Though the gameplay is great, it can’t make up for the short comings of the rest of the game. That being said though, I would love to see Square implement the gameplay ideas from this game into other possible titles whether or not they are in the Kingdom Hearts series.

This is the hardest game I’ve ever had to review. Not that the game was difficult (it was actually too easy), but because I love the Kingdom Hearts series, and Re:coded is well…it just isn’t the quality I would expect out of Square.

I really want to love this game, but I can’t bring myself to. I’m sorry Kingdom Hearts Re:coded, but I can only give you 3 GiN gems out of 5.