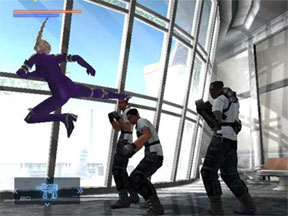 Once again Namco has blown the doors off the gaming world with arguably its strongest and most action-packed installment of its infamous flagship fighter series to date, "Tekken 5." From jaw-dropping graphics to an arsenal of new grapples and bone-crunching moves this one’s packing some serious punch for sure. Matter of fact, if you haven’t got the game, where the GiN have you been? Just stop reading here. You’re lost.

Life has truly been unkind to you. Seek medical attention. Get thee to a "Gamespot," "Walmart," or "EB.". If you don’t believe the hype check out GiNs own Todd Hargosh’s Tekken 5 review: A perfect "5", read ’em, "5" GiN gems from "Mr. GiNHardcore" himself. Enough said.

But let’s cut the "smack-talk". Tekken 5 speaks for itself. Ushering in Namco’s newest trademark fighter is a promotional spin-off of the Tekken series, "Death by Degrees" starring Tekken’s own "blonde-from-beyond" Nina Williams. Taking a step in a new direction, "Death-by-Degrees" is a story-based action/puzzle fighter revolving around the life of Nina Williams, giving gamers a more in-depth look at her character profile"and, aaah, some of her more vivid physical attributes.

Nina is an undercover agent/assassin for the CIA in a joint investigation between the CIA and Britain’s MI-6 division. Britain has dispatched two of its top agents to infiltrate the "Amphatrite," a luxury ship that has set sail out of Fort Lauderdale, Florida. Intelligence suggests that there is a certain mysterious organization on board that the government has apparently had its eyes on it for some time. The objective of this joint operation between the CIA and MI-6 is to infiltrate this luxury ship and record a secret meeting between certain members of this particular organization.

The outfit for the operation calls for two "sneakers" and a "sweeper."

Britain’s agents are to sneak on board, infiltrate, and record this secret meeting. Nina’s role is to be the "sweeper" or, a.k.a., to "provide distraction" while MI-6 does its work. Nina joins an underground "fighting tournament" onboard the ship and entertains the guests with her deadly martial arts style and finesse to help buy some time for her unit. Once her co-agents complete their objectives everyone is to meet at a designated rendezvous point and make their exit.

The mission seems like a fairly simple cut and dry one but something goes terribly wrong after one of Britain’s agents turns up missing and dead. Now it’s up to Nina and Britain’s lone MI-6 agent to complete the mission assignment and escape the "labyrinth-like" ship to bring back video footage of the secret meeting. But, of course, that’s easier said than done so Nina will have to break out her martial arts expertise to pull this operation off.

All of the above is played out in a fantastic opening cinema scene that would at first make the game seem very promising and appealing. Super-sharp visuals and audio during the opening presentation will definitely make you raise an eye-brow if not cause a little "drop-jaw."You’ll watch in awe as you see Nina showing off some seriously cool bone-crunching moves while the MI-6 team infiltrates the ship "Splinter Cell" style. Unfortunately, once this gorgeous cinematic prelude is over the truth slowly begins to unveil itself with time and in the end leaves a little room for complaint.

For starters, the actual in-game graphics are a far cry from the cinematics and so one can’t help but initially be a little disappointed after such a grand entrance. Nina looks drop-dead gorgeous during the cut scenes but loses some major kudos during actual gameplay. Her body appears to be a bit stretched and disproportionate and her mobility looks awkward and a little on the stiff side. While it’s true her entrance attire, a very skimpy two-piece bikini, is a pretty little piece of eye candy, one can’t help but notice her generic physical dimensions. It sort of leaves you with that "Wow, she’s so hot, how could they do that to her?" kind of feeling.

Though the environments are pretty rich and somewhat imaginative it just seems like the background scenery is out of touch with the actual story plot. I mean the first thing that comes to mind is why do two powerhouse intelligence agencies like the CIA and MI-6 go through this tedious infiltration mission onto a luxury boat when they could have just as easily had their agents buy a couple of Class "A" tickets and board the ship as regular passengers. What’s with the jet-black stealth suits? Camouflage? Wouldn’t a 3-piece suit, a set of high-tech sunglasses with video-record capabilities, and a suitcase chained to the wrist wired with "audio-pickup" and a built in mini-machine gun for those die-hard situations be more appropriate for this kind of mission?

I mean that’s just some classic "James Bond 101" I’m throwing out there. It just seems like this kind of plot should be played out at some high-security secret terrorist base out in the far reaches of the Artic. But I guess that storyline has been taken so hence we play it out on the "Love Boat."

The control layout will probably fill a little familiar if you’ve played games like "Jet Li: Rise to Honor." I personally came to appreciate the control system of Rise to Honor after a little practice and was kind of anxious to see how that same concept might work here.

The analog sticks as opposed to the buttons are the primary controls for Nina’s offensive and defensive moves. This rare new concept allows Nina to attack, defend or even parry from eight different directions around her. Having a control system like this on hand allows players to simultaneously take on mobs of bad guys with a quick tap of the analog in any desired direction making those frequent handicap encounters more thrilling and realistic.

You can battle enemies with your bare hands, melee weapons, or even firearms. With a little practice and careful thought, one can link several different types of attacks together with others to produce some nasty and devastating chain-link combos. And for those in-close encounters Nina can perform a variety of throw attacks to keep her enemies at bay.

The coolest gameplay feature of Death by Degrees is without a doubt the "critical strike" move. Successfully pulling off combos will gradually build Nina’s "Focus Meter". Once it’s full she’ll be able to target an enemies vitals and perform a brutal bone crushing move, most of the time ending in either several broken bones or instant death for the enemy. When the critical strike is successfully engaged, a "Critical Strike Screen" appears. It looks a lot like an x-ray of your enemy displaying all their vital organs. You move the cursor to an area highlighted in red and tap the right analog stick within the time limit to deliver the killer blow.

Despite all of it’s advantages, what’s not to like about the control layout is the fact that because the analog sticks are so pressure sensitive Nina doesn’t always respond the way you want her to during combat making encounters more than oft a little frustrating at times. There are occasions where she will suddenly stop responding in the middle of an attack combo or unsuccessfully guard or evade an enemy’s attack if your analog isn’t in the exact precise position at the particular time of the assault.

There is an "Evade Sensitivity" option to help make things a little easier but overall it can still be a frustrating experience. While it’s true that some of these frustrations could be somewhat remedied through time with a little practice it’s still quite evident that the "control response" aspect needs a little work.

A couple more miscellaneous gripes do come to mind about "D by D." For one, I’m not crazy about enemies re-spawning in areas you’ve already been before. Perhaps this was done just to try and keep the action up between all those dull "seen-that-before-in-Resident-Evil" mission puzzles. The problem, however, is that after awhile things go from fun to insanely monotonous and makes you feel like all your work is in vain.

The camera angles play such a major part in this genre of game and Namco really drops the ball here. I haven’t seen camera angles this bad since "Tomb Raider."

When navigating around the ship the camera often resets to awkward angles, most of the time leaving you to walk blindly into enemy encounters. It can be manipulated somewhat but you’ll constantly have to adjust the angle anytime you change direction. These horrible camera angles make boss encounters somewhat the equivalent of pulling teeth.

On a more positive note however, besides a few extra unlockable game modes that aren’t really worthy of mention, the game does come with a special bonus demo disc of Tekken 5. If you haven’t got on the boat yet then you can tease yourself with this tidbit of the real thing until you finally come to your senses and go out and buy it.

The bottom line is "Death by Degrees" could have been a really good story/fighter with a little more work but in reality is what it is and that is a "promotional product" released solely to promote Namco’s flagship fighter, "Tekken 5" and to perhaps lure a few extra hard-earned dollars out of the pockets of fans and loyalists of the series. Sorry if that was you.

None the less, while the game certainly has its shortcomings, it still manages to turn out a slightly better than mediocre performance simply for its awesome cinematics and somewhat innovative gameplay features.

I believe this is one of those games one might love today and hate tomorrow or vice versa. Kind of like shoes.3 + GiN gems is my final verdict for a game that’s somewhat of a mixed bag of fun and frustration.