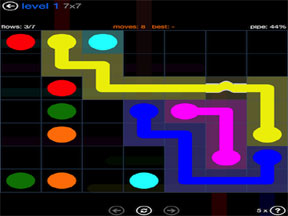 Look, I admit, it’s not often I get truly involved in a game. As publisher at gameindustry.com, my role is more that of ringmaster sometimes than of game enthusiast (which I am!). But occasionally, a game reaches out, grabs me by the frontal lobes and forces me to pay attention to it.

For the last few months, that game is Flow and it’s follow up, Flow Bridges. Both are produced by Big Duck Games and are part of the growing revolution in gaming being produced by smartphones and tablet computers. Flow fills a need and does it well.

Essentially, Flow is a pathing game. The player is presented with a grid and a set of colored (or text if you’re color blind) spots and it’s the task of the player to find a way to make paths connect similarly colored spots while also using every square on the grid. It’s simple. And it’s difficult.

While on the surface a simple game to understand, there’s a lot of math underlying the solutions to the puzzles. Especially on the harder levels, which go up to grids of 14 by 14 and have more than 10 sets to connect, the solutions can be fiendishly hard to put together. But not impossible. Flow rewards concentration and an understanding of how the game world works.

It’s also become a bit of a phenomenon. The game held the top spot on iTunes for several weeks, and millions of users have downloaded it.

There have been several times where I’ve been in public, just killing time (say, at a kid’s gymnastics meet when my kid isn’t on stage), where I’ve been approached by random people to point out that they, too, find Flow fascinating. And it runs from guys in trucker caps and boots to soccer moms to the suits and ties of the corporate world. Flow’s got fans, and rightly so.

Seriously, this is a game that could live in the TRON world. I could see Kevin Flynn running around, pushing these lines into place while he’s being chased by recognizers for some ill-defined purpose. These games are that good.

And it would do you good, and likely free your mind for some problem-solving, to play it. Good luck!

Flow earns 5 out of 5 GiN Gems, and gets my nomination for mobile game of the year.