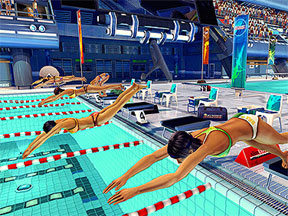 With more than 25 activities to keep you interested, one might think that Summer Athletics: The Ultimate Challenge is spreading itself a little thin as a all-encompassing sports title for the Wii, but while it does have its shortcomings, this title does well to keep a varying list of events and activities to keep sports players interested in the game.

Summer Athletics focuses on several event categories, such as swimming, archery, running, jumping, throwing, the high dive, and cycling, though there are several events held within each individual category.

The controls for each of these games are going to be what catches most players’ attentions, as some are smooth and easy, while others tend to be a little more taxing than they probably should be.

For example, the high dive is nothing more than a timing game, as players try to match up the strikes of their controller and nunchuck (for the Wii version) to that which shows on the screen; however, the swimming event has players flailing their controls in circles, which usually ends up with the nunchuck chord wrapped around their arms-hardly a winning feature.

By far, the event that I spent most of my time on was the Archery challenge. Here, we have a test of aim and timing, as outlying factors like wind and pull strength dictate how well you do. Easy and repeatable, this engaged my competitive tendencies to no end.

Still, as far as engaging content goes, you have to wonder exactly how much a few hits and other misses is worth. Admirably, since its quality isn’t overwhelmingly top notch, the makers of Summer Athletics aren’t asking full price for their title, and this is enough for me to recommend this title for any gamers in a knock-down/drag-out search for new Olympic-styled experiences.

This goes double if you happen to have a friend interested in the same kind of gameplay.

For the cynical, however, don’t expect Summer Athletics to be anything more than its box lets on. These are a series of minigames that tend to repeat themselves more than they surprise.

A bargain game made, I suspect, to cash in on the fervor of the Olympics, Summer Athletics delivers what it suggests it should deliver without frills or extra miles.

There are attempts at extracurricular options, such as the achievement medals that can be unlocked after performing a series of different tasks and prerequisites. Also, we have a character augmenter that lets you fashion your players as you see fit, but it’s nothing to rave about.

While the game is arguably solid, to view Summer Athletics as anything more than a pastime game would be a mistake. It comes in to do a job, then it leaves, upholding its promise without going above and beyond, or making a lasting favorable impression.