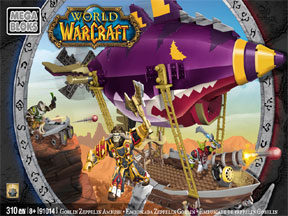 When the folks at Mega Bloks met the folks at Blizzard, a beautiful thing happened. World of Warcraft building sets were born. Recommended for ages eight and up, this set of put-it-together yourself fun provides hours of enjoyment, and a serious opportunity to geek hard.

If you’re getting this set for your eight-year-old, be forewarned that the World of Warcraft Goblin Zeppelin mega build has 310 pieces, and even the brightest of kids is probably going to need some help putting it together. Some of the pieces are quite tiny, so keep younger siblings and pets away from this project. But lets be honest, a lot of people who get this set are going to be pretty far past the eight-year-old mark. Never fear, this really is fun for all ages.

The details on the Mega Bloks Goblin Zepplin are amazing. They didn’t take shortcuts where they could have, so little things like pins to make the ballasts hang are actual pins instead of one fused piece. Details like that are what make this set challenging and fun to put together.

While I would have preferred if the pieces had been put in bags either by color, or in relation to where they went on the zeppelin, at least there weren’t any missing. The directions weren’t quite as clear as they are on say, an IKEA project, but they were thorough and the photographs were helpful.

In addition to the Goblin Zeppelin itself, the set comes with a Goblin Rogue, a Tauren Paladin and a Worgen Rogue. They have super cool Judgment Armor and you can customize their gear and weapons.

Also included is an Alliance Crossbow that you can build with a launcher that really works. It’s fun to shoot the mini figures off the zeppelin with the crossbow, or if you get one of the other Mega Bloks World of Warcraft sets, you can shoot at them.

This set comes with random loot, a cool homage to the game itslef. Mine came with an extra weapon, but it could have been extra armor instead.

In short, despite some organizational issues with the pieces, and some small difficulties with the directions, this is a great set. World of Warcraft fans should definitely check out these Mega Bloks sets.

They come in a range of sizes and prices, so they offer something for every fan. Smaller sets would, of course, be less expensive and easier for kids to put together. But if you really need to get your WoW on, the bigger sets are kind of awesome, and the World of Warcraft Goblin Zeppelin falls solidly into that category. Even if you aren’t a fan of World of Warcraft and just enjoy building fantasy block sets or putting together models, these are pretty cool. Check them out.