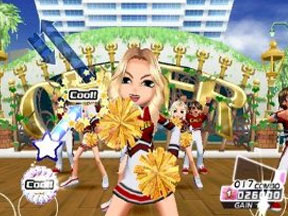 We Cheer 2 follows up its pom-pom shaking predecessor with some new dance moves and new stages along with both male and female characters this time round. And of course there are complimenting outfits for each gender.

The game utilizes two Wii remotes as pom-poms as players perform full body motions to a fairly strong selection of songs from both past and present. For the cheerleading enthusiast you can even purchase pom-pom cases for your remotes to help add more spirit to your experience.

Even though you’re not hitting buttons in precise real time as you would in other music simulators out there, there is something a little "Guitar-Hero-esque" about the game, except that you’re moving your arms with the beat instead of just your fingers and feet. Points are awarded based on how well players stay in sync with the routine using a variety of different arm movements. You can take a quick crash course in the training mode to help get the basics down, but all in all it’s fairly easy to pick up the basic gist of the game.

The thing is, even though this might be an appealing concept for fans of this genre, the overall presentation of the game is just "ok" at best starting with the graphics department. Not your typical eye candy to say the least, this game is in a little need of a face lift. Basic color variations and faintly blocky or slightly muddy visuals from time to time don’t do a lot to help matters out either.

Surprisingly the strongest feature of the game is the audio. The game ships with around 30 chart topping songs sure to motivate a funny bone or two even if you’re the couch potato type. Pop music seems to be the theme for a lot of the dance routines and it’s just enough to make you get up off your butt and act a fool in front of all your friends or family.

Once the music starts, the cheer squad kicks into action with their dance routine and it’s up to the players to keep in sync by following all the on-screen pattern cues with the corresponding body movements. If you’re not the coordinated type you can set the game to play with just one remote, but once you get comfortable you’re definitely going to want to go with two remotes for the total cheerleading experience.

Initially, the game starts out as a blast. Despite even its lackluster visuals, there’s some fun to be had here, especially once you grasp the basics. The real setback, however, is that despite it’s innovative approach the challenge level of the game diminishes quickly over a shortened period of time and you begin to find yourself paying more attention to how tired and out of the breath you are at the end of your routine rather than looking forward to the next challenge.

On top of that there is some questionability with regards to the accuracy and sensitivity of the game. On more than a few occasions you may find the computer awarding you points for moves you know you totally blew or vice versa penalizing you for moves you know you totally nailed. The game recommends that you move like the on screen dancers to help develop better accuracy during your routine, but not only is this concept a lot easier said than done but it also doesn’t make a huge difference overall and most times leaves you that much more winded. Whatever the case may be, it’s clear that the sensitivity of the game probably could have used a little more tweaking before the final cut.

The multiplayer modes of the game are fun for the most part, especially if you have enough remotes for each hand in two player mode. Up to four players can actually play with a single remote for each person. Just be sure to have plenty of workout room before you try any of these types of sessions. Still though, there’s only so much fun a few people can have before someone or everyone falls out from pure exhaustion, which again for most will probably end up yet another short-lived experience.

The game also sports an exercise mode which uses specific movements to target certain parts of the body. Of course movements here are a little more intense than the other modes so if you’re not serious about toning up you most likely won’t be spending a ton of your game play time with it.

All in all, We Cheer 2 will most likely end up a less than mediocre experience for non-enthusiasts and mildly entertaining for hardcore fans that are really into the sport. The visuals could have been better, especially for a next generation title, and the hype of the game is hampered by quirky sensitivity and an element of fun that seems to dwindle quickly as time goes on. In the end 3 GiN gems is all I can give a game that comes off as just "ok."