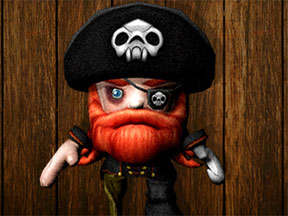 Throughout the history of video games, there have been multiple titles that are similar to one another. Pirate Jump 2 for iOS on the iPad by EnsenaSoft has a similar gameplay to Temple Run, probably the best known of the endless runners.

In Pirate Jump 2, the main objective is to run as a pirate captain while jumping gaps, ducking under obstacles, and dodging skeleton pirates. You automatically gain points by running and not hitting the obstacles in your way. There are also diamonds that you collect to gain extra points.

In the start menu, the game has three different colored diamonds to choose from: blue, green and red. Each color has the same starting level, so it didn’t seem to matter which one was chosen. The difficulty was the same on each level. The only difference was the colored diamond to pick up.

The characters and setting for Pirate Jump 2 are done in cartoon style 3D graphics. The scenery could be more pirate rich with more going on in terms of the background. The music is cheery but repetitive.

Pirate Jump 2 is fun to pass the time when you’re looking for a game to play as a pirate. Playing as a pirate in any game is always a plus.

Suggestions I would make for the game to be even more fun would be more pirate obstacles, like treasure chests to jump over ship beams to duck under, or even sharks in the background to add ambiance. It would also be nice if there were different levels associated with the diamond colors.

This game is a fun time passer for the iPad, but its long lasting play factor is not as high as it could be. Pirate Jump 2 for iOS gets 3 out of 5 GiN Gems.