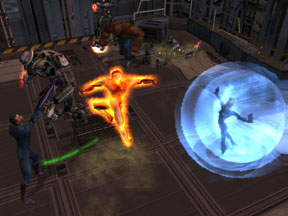 Reed Richards, Susan Storm, Johnny Storm and Ben Grim otherwise known as "Mr. Fantastic," "The Invisible Woman," "The Human Torch," and "The Thing" are among some of the greatest legendary heroes of Marvel. It’s no wonder there was such an excitement in the air when news hit the fan about their big screen debut. Some might have even argued that this movie was the next "big thing" to come out of the comic book archives. None the less, the real truth was unfolded before the eyes of marvel fans on opening night and that truth was pretty much summed up into one word: ""eeaaah."

Ok so it’s no secret by now that the movie, though it had its big screen moments, could definitely have used a little more salt, particularly in the storyline area which came off a bit shallow and tacky. Still though, in the end, it managed to come out on top, perhaps not in the grandeur way of other hit marvel movies like "X-men" or "Spiderman", but it certainly didn’t earn itself a permanent place in the big-screen "Hall of Shame" like its other lesser fortunate predecessors, "Elektra" and "The Punisher."

At any rate, when a movie of this genre and caliber, with such a large following of enthusiasts, makes its mark on society it’s only natural for it to be followed up by a "movie-to-platform" title to help rake in some serious revenue and boost fan support. Yes, to no one’s surprise, Marvel’s newest "comic book-to-console" spin-off, "Fantastic Four" the videogame has hit store shelves in full force. Does it, however, live up to the hype and anticipation of the fans or much like the movie does it leave you wanting a little something more? Let us turn the page.

Fantastic Four puts out a solid presentation in the graphics department overall. For starters all of our in-game heroes have been molded in incredible detail, from their real-life big-screen counterparts, an added plus, helping to modernize this legendary cast of superstars and give gamers a chance to relate to and relive some of those occasional great movie moments.

Sharp 3-D environments help to add to the graphical splendor of the game. You’ll find that tracking down bad guys is truly a full-time job as you take villains down from all parts of the world, including the back alleys and main streets of big cities to far away dense jungles and ancient ruin locales. Before it’s all said and done, you’ll feel like you’ve been on an action-packed safari ride.

The actual voices of the actors from the movie have been integrated into the game which is always an added bonus. From time to time, you’ll hear some famous lines or catchy phrases from different members of the team usually typical of their own unique personalities. Who can forget, of course, the Thing’s favorite line, "Its clobberin’ time!"?

The sound effects and music are pretty clichT of your everyday smash ’em, bash’em action brawler. There are plenty of explosions, thuds, thumps, and loud crashes to go round for everyone. It would have been nice if they jazzed up the background sound tracks a little more to help give the fun a little more spice but still they manage to get the job done in the end.

The biggest gripe I have with FF4 would have to be the storyline though or perhaps I should say the lack there of. Here’s a quick tip right out the gates: "Watch the movie, play the game and not play the game, then watch the movie." Trust me you’ll be better off. The movie and the game don’t really coincide with each other as smoothly as they should. Unless you’ve watch the movie first, the game’s shallow storyline, which actually only integrates a few selective skits from the actual movie into its plot, doesn’t really flow together real well and is full of historical holes.

Thankfully, a very strong game play engine makes up for a pretty weak storyline. If you play enough of Fantastic Four, you’ll notice that the game plays a lot like the popular "Xmen: Legends," but with a little more class and sophistication. The controls are mere child’s play for the advanced gamer and very user-friendly to the lesser coordinated. A majority of the moves in the game can be performed with the tap of a single button and some of the more advanced combos you gain as you progress through the game are only three to four hit button combinations. Moreover, you can really take advantage of this easy-to-use control concept and tap into a wide range of combat moves and tactics taking bad guy bashing to a whole new level.

Team cooperation is totally encouraged in both the single player and multiplayer aspects of the game, especially when it comes to puzzle solving and taking down level bosses. You’re going to have to call on each team member’s special ability to get you out of a jam on at least one occasion or another during the game. Not only can Reed Richards think himself out of just about any situation, he can also shape shift his body for those awkward situations and fight enemies from a distance using his own very unique stretch-n-reach tactics.

Susan Storm specializes in remaining unseen. She’s perfect for small enemy encounters. Besides making herself invisible, she can create shields and manipulate energy.

Johnny Storm does what he does best: Scorch any opposition in his path. From fireballs to fire walls he’s the total package for heated destruction.

Ben Grimm is the man for brute force expertise. With his super strength he can quickly disperse of large groups of enemies through massive attacks. Once you become familiar with every member of the team and their distinguished capabilities the game establishes a whole new level of fun and value.

Need a computer interface hacked or door unlocked from the other side? Reed Richards is your man. Need to stealth your way around a few guards? The Invisible Woman is the hero for the job. You need to heat things up a bit? The Human Torch won’t let you down. Are you big into home reconstruction? The Thing can turn the place upside down for you.

The bottom line is while Fantastic Four the game, much like the movie, poses somewhat of a shallow storyline, the negative aspects of the game are heavily overshadowed by stronger, more positive features like sharp visuals, a familiar and enhanced game play engine, user friendly controls, and solid multiplayer support. More importantly the game is just addictively fun and doesn’t grow old even after you complete it. I recommend this title to any serious Marvel fans out there as well as to anyone who appreciated similar games of this genre such as Xmen: Legends. FF4 easily earns a fantastic 4 GiN gems.