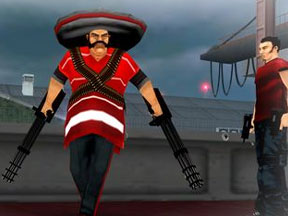 For some reason, I feel that if I were a better person, a more moral person, I would not like Chili Con Carnage as much as I do. When I first started playing, I could only think about how terribly overplayed the stereotypes were, but as I continued, I couldn’t help but laugh at all the side jokes and allusions found in the game, my favorite being a small take from Reservoir Dogs: "You like K’Sanchez’ Mariachi Mega Sounds? It’s my personal favorite." Classic.

Now that it’s all said and done, I’d have to say that this is one of the more enjoyable games I’ve played on the PSP to date.

To set the stage, the PSP game starts as Ram, not a felon this time around, presents his Federale father, Ernesto, with a box full of kittens as a birthday present. Just as Ram’s father is adoring all the mewing animals, a combine comes crashing through the office wall, cutting both the father and the kittens to bloody bits.

Rather obviously and without much worry for getting caught, Mama Virgillo has murdered Ram’s father!

After this, Ram vows to avenge his father and sets off on a rampage that will lead him through a highly improbable Mexican underworld.

The gameplay is very reminiscent of Max Payne. Shoot-dodging and bullet-time actions are some of the staples found in Chili Con Carnage, but the differences in moves, graphics style, and story are enough to set it apart.

You can drive cars, forklifts, and tractors, as well as hang off a helicopter in one level, but each of the levels are self-contained, a choice which Chili Con Carnage has used to perfect its humorous elements, tying it all together with a unique thematic clarity.

With Ram, there are a number of moves that can be performed, including jumping off walls and close-up takedowns. What makes the gameplay even more interesting is the fact that a points system is involved with these moves, making the act of fighting through levels even more challenging.

Normally, I’m not a play-for-points kind of gamer. Especially in serious games, I don’t like being distracted by a running tally of points while playing through a story; however, with Chili Con Carnage, an aspect of fun is attached to the point system. The crazier the move, the more points, which makes you want to try more off-the-wall things to see what happens.

The points system also works well because of the challenges that come up in between levels. Learning to do better tricks and perform more interesting combos will get you through these levels, which will ultimately unlock characters and different modes of play from the start up menu.

There are both single player and multiplayer game modes to explore. In single player, you’ve got the game itself and an El Macho mode, which challenges you to keep a running combo in any given level. On the multiplayer side, Hangman mode is an offline multiplayer competition where players take turns to score the most points. In Fiesta mode, you can play with two or more players to be the first to reach a set point limit.

Overall, Chili Con Carnage is an impressive game, having a lot going for it in nearly every department, all while also giving you that wrong feeling you used to get while playing Redneck Rampage in ’97. If you’re looking for a game that doesn’t take itself seriously while providing a solid gamin experience, then this is your ticket.