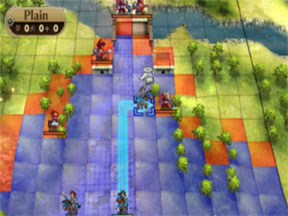 Fire Emblem as a series has been near and dear to my heart forever. When I was in high school I played The Sacred Stones on a Gameboy Advance and have since beaten the game over fifty times. Of course every series has its down points, and for me that was the time period when the series was ported to the Wii and Gamecube. While they were okay games in their own right, it just didn’t feel like Fire Emblem.

So when Awakening hit my desk, I looked at it with mild trepidation. Could this be Nintendo getting back to basics and returning to their winning formula? Or would this be another game that could be forgotten without much pause. Well, everyone, it is my pleasure to announce that this is one of the best strategy games I have ever played!

There are so many places to begin, so lets start with the story. Like every Fire Emblem game before, this story was top notch and for only the second time in series history, it let the player add their own character to the story. For the first time though, you are actually allowed to use your personal character during the story.

For that character, you are given a few customization options and allowed to use the aforementioned avatar. While the options aren’t extensive, they are comprehensive enough to make it fun.

The story follows your character as he is found passed-out in a field with amnesia. A prince named Chrom finds you and you join up with their companies. The story only gets better from there. One really interesting future is that if your character gets a good enough support rank with a character of the opposite gender, then they get married and you get an optional mission to get the future children and add them to your party.

Graphics in this game are great for the 3DS and only the console games beat it, but that’s no surprise. I was actually surprised and blown away by the video cut scenes and really think Nintendo went all out this time around.

Audio is amazing and as always, Fire Emblem comes in with a very beautiful score to it. Also, it’s nice to hear some voices added to the characters like Gregor who sounds Russian and is actually funny to have in conversations. Of course the cut scene audio is fantastic as well.

The tutorial for first time is very comprehensive and helpful. All of the controls are easy to pick up and use and overall the gameplay is nothing short of flawless. With a new system in place where units can pair up there was a small learning curve, but it took me only two short levels before I was using it effectively.

Fire Emblem also has some of the best 3D I have come across. It’s smooth, and has some interesting effects when certain abilities are used. In addition, it gives an interesting depth to the dialogue screens.

Overall, as a whole this game earned the title of Fire Emblem and I stand behind this game a hundred and ten percent. Also, I want to say I think it should be the 2013 game of the year. It’s that good.

If you have a 3DS and you see this title, buy it before a second thought crosses your mind. I give Fire Emblem Awakening an outstanding 5 out of 5 GiN Gems. This is only the third time I’ve ever awarded a perfect score, but Fire Emblem earns it and then some.