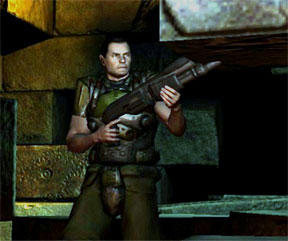 I have never been more scared of anything than I was when playing DOOM 3. Anyone who has read my previous columns knew I was actually scared of whether or not the game would run on my computer without any problems. Well, now that is not the reason I was terrified; I was terrified at how id went to such great lengths to create a gameplay engine so dark and moody that it brings fear to even the most hardened souls.

DOOM 3 has been in the works for about four years, and from the way the final product looks, it was well worth it. Granted the gameplay might be standard fare compared to most first person titles we have seen today (Metroid Prime, Far Cry, Halo, Tron 2.0) but what it lacks for in originally it definitely makes up in style and substance.

The original DOOM had a very simple plot of a demon attack on two moons of Mars, but that was about it. For DOOM 3, which is actually a retelling of the original, we now have a mastermind behind the chaos, and his name is Dr. Malcolm Bertruger.

Continuing work on teleportation technology developed by his employer, the Union Aerospace Corporation (UAC), Bertruger’s corrupt mind plans using the teleporters to summon demons from Hell to attack that UAC’s Mars base (also known as Mars City), and eventually lead his attack towards Earth.

The UAC is aware of Bertruger’s plans and sends a corporate advisor, Eliott Swann, to watchdog over Bertruger’s actions. Swann brings along two marines for cover: his personal bodyguard known only as Campbell, and you, a newly dispatched marine assigned to security detail.

Upon arrival at Mars City, you realize that something is wrong. Employees are heard complaining about morale being low, and how some actually want to leave Mars, fearing the worst. They weren’t kidding, as when you are sent to locate a missing scientist, there is a violent shockwave, and on the screens in the room, you witness the invasion starting. Even the scientist you located was turned into a zombie. From there it’s standard DOOM fare, using your weapons to stay alive and find out just what the hell is the meaning of all this chaos.

Anyone who is familiar with DOOM will feel right at home with all the weapons that are available: pistol, shotgun, chaingun, rocket launcher, plasma gun, chainsaw (perfect for butchering zombies), and the BFG 9K. The new game introduces a machine gun (which unlike the one in Quake 2, has no recoil to compensate for), hand grenades, and an alien weapon called the Soulcube that just might be your last saving grace.

Standard DOOM monsters return as well, but they are far ahead of the thee frame characters used 10 years ago. Zombies now come in all shapes and sizes, whether they just walk towards you Resident Evil style, or if they are armed and know how to defend themselves (the zombie soldiers even wear the old black and red uniforms, sort of a tribute to the classic series). Even rarer monsters from DOOM II such as the Mancubus make a return appearance, and our favorite Misunderstood Genius, aka the Pinky Demon, comes back as well. His intro to the game has to be seen to be believed, almost done as a tribute to Jurassic Park.

In fact, any time a new monster is shown, there is an impressive cut scene which shows him off to the fullest, all in real time (no FMV sequences to be found except perhaps the opening).

Keys from the original game are now replaced by PDAs. When a PDA is found, the information carried on it will download to yours, including emails, mission statements, and audio/video files providing valuable UAC data. Use of the PDA is important as some emails and audio files include locker or door combinations that will provide much needed weapons and ammo.

DOOM 3 was always mentioned for its unique graphics engine, one which is light years beyond any seen in a PC title. I couldn’t agree more. Even at low detail, the game looks much better than any other game running on high detail. The lighting is amazing, perhaps even beating Splinter Cell for the best lighting I have ever seen in a game. Surprisingly, I thought that these amazing graphics would require a dream system to run correctly. I found that even on my Athlon XP 2600+ with a Radeon 9800 card, for most of the time the game ran at a very smooth frame rate. There were some times then the game would bog down a bit when several monsters were on the screen, but nonetheless I was impressed with what I saw.

Id swore that they would make the game accessible to everyone, not just those who own dream systems, and they kept their word, but believe it or not, there is an "Ultra Quality" setting designed for video cards that haven’t even been released yet (those that will have 512 MB of video RAM on them), so it is obvious that DOOM 3 will be used as a benchmark for future products.

The sound did not receive as much press as the graphics, but it deserves equal praise. There isn’t really much in-game music most of the time, but it is not really needed, as just the sound effects themselves are enough to provide sheer terror. Just a shriek from a monster coming out of nowhere made me jump out of my seat, and when I started to hear strange voices saying "help me," I was clinging to my chair for dear life. Sadly I wasn’t able to play in 5.1 surround sound, and I wish I did, because the experience would be very traumatic.

As for the scariness, id pulls it off nicely. While most of it is the jump out of your seat type of fear, there are elements of psychological fear as well. One moment I remember well is after the invasion, you go to the lavatory and look in the mirror, and then the game switches to grainy footage of your character suddenly turning into a zombie. That image was stuck in my mind for hours on end, and it still creeps me out.

DOOM 3 is meant first hand to be a single player game, with multiplayer thrown in as a bonus. As a result, the multiplayer modes are rudimentary. I’m sure that will change in the coming months with the MOD community taking over. As for the single player campaign, it took me about 20 hours to finish the game, and with it looking so good and being so enticing, I’m sure I will go back again on Nightmare mode.

DOOM 3 is the true summer blockbuster! Four years of hard work and dedication are well worth it as id continues to innovate with their technology. I’m sure we will see the DOOM 3 engine used in other games in the near future (makes me wonder if Raven will use it for Quake IV). As for the game itself, it is at least 20 hours of sheer, gut wrenching terror and one trip through Hell that I wouldn’t mind doing again.