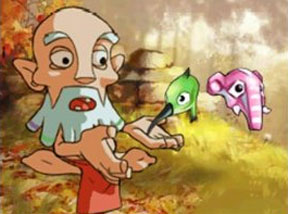 This was a fun little Toys R Us exclusive. This game has a lot of potential and time consuming fun. It’s not hard to pick up, it’s not hard to grasp at all, and the story is pretty intriguing. The controls are simple without feeling cheap.

The game starts out with animated stills for cut scenes similar to a Penny Arcade art style. The narrator is an old Ghandi-looking guy who floats above the ground in a lotus position to impart the wisdom of the ages to you, or something fancy like that. In fact we’ll call him Floating Ghandi. He informs you that you need to learn the ways of soul capturing by creating a bubble to carry these little Christmas bulb sized spirits to safety.

There are nasty creatures in the rain forest and they want to harm the spirits. You have to create a bubble that will transport the spirits through mazes and obstacles to their homes in the forest called Gateway Cubes. These cubes transport them back to the spirit world.

When your character appears on the screen he will be floating around trying to get used to his environment. He is instructed to start his mission at the bottom of a great tree which holds the levels in the game. You start out at the trunk of the tree and work your way up to the branches where the levels get a little more difficult.

When you start a level you have to draw a bubble by making a circle on the DS touch screen. This will form the bubble. Your character will acquire masks which he can put on to make adjustments to the bubble or attack foes. If you need to you make the bubble smaller or even split it apart which will all help you make it through the mazes.

The little spirit guys will be floating around you at the beginning of the maze so all you have to is draw a circle around them and they will be safe in the bubble.
To get the bubble moving you just move your DS stylus in the direction you want to go and the character will blow the bubble in that direction. You need to monitor your speed because once the bubble takes off it can go pretty fast, which can help at times.

If your character blows for too long he will get tired and start panting. Give him a few seconds and he will be fine.
The mazes are pretty straightforward at first. You’ll notice that the graphics are impressive in their 3D effect. You’ll see the forest grow deep in the background while the vines around you seem to pop out of the picture as you progress through the mazes. It’s impressive and if you appreciate art you will love the effect.

Some of the curves are sharp and some are very large. The large curves you can just fly through easily but the smaller ones may require you to adjust the bubble. You can simply cut the bubble into sections using an attack mask and then you can reassemble it later. If you lose a part of the bubble you can pull up your map to find it by moving the stylus around the map screen.

The camera will view wherever you go until you find the missing parts. When you find them all you have to do is touch that part of the screen and you will transport there. This is also very useful in finding items.

As you move through the mazes you need to find items in order to unlock new levels. The items are three golden nuggets in each maze. Finding them in each level allows you to unlock the next sections of the tree to explore. It’s really not too hard since you can view the map from where ever you are and transport to unexplored or missed spots in the maze. Once you find the nuggets your game will save them and the new areas will unlock.

The creatures you face are pretty simple. You’ll face bees, worms, or even mole-like creatures which jump out of holes to try and pop the soul bubble. You just tap any of the creatures and they will die while turning into little flowers to decorate the path with. It’s kind of an Okami affect from Playstation 2. You’ll also run into vines that have overgrown the path and the soul bubble will get stuck in them. You just swipe your stylus over them and the will slice apart. You can even move ahead of the maze and clear the path for the soul bubble in advance. Pretty good tactic for later levels.

But all in all this is a fun puzzle game to add to your collection. It’s simple. It’s artistic. It’s original. The controls are easy to grasp. And the levels offer a nice progressive challenge as you play. It’s not an adrenaline game or a fast reaction game. It’s calm and enjoyable which could be a nice break from the more aggressive interactive games. Soul Bubbles is a good choice.