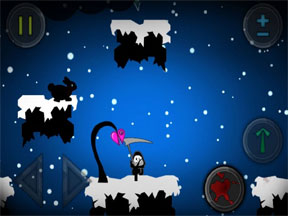 With a name like Bunny Reaper, how can a game go wrong? Alas, it’s easier than you think. I expected Bunny Reaper to be cute and funny. Something like "Little Bunny Foo Foo." I wanted to go strolling through the forest as the grim reaper, finding little bunnies and lopping off their heads with my scythe. So it’s kind of like that, only not really.

The game is dark. I don’t mean that in a creepy, sinister way. I mean it’s actually dark. It’s kind of hard to see the bunnies because they’re just black bunny silhouettes sitting in the snow against a dark sky. The grim reaper is obviously also dressed in black. Killing the bunnies just leaves a dark read splotch where the bunny silhouette used to be. No fluffy bunny heads rolling with little exes in their eyes, just a dark red splotch. The whole thing is just really dark.

What are the snow-covered platforms? Why are they in the air? I don’t know. The game was so dark at first I thought they were clouds.

Why would bunnies and trees be living in clouds? Your guess is as good as mine. I play a lot of games and I’ve seen some pretty bizarre storylines in my day. Think about Mario Bros. for a minute. Right? Great game. Bizarre story. Bunny Reaper doesn’t seem to have a story beyond a bunny killing grim reaper.

For those of you keeping track, that’s not a story. That’s just a character. Maybe there is a great story buried in deeper levels. I didn’t get that far, because this game commits the greatest sin a game can commit. It’s not fun.

Instead, Bunny Reaper is a generic 2D platform game with passable mechanics, no storyline and oddly dark graphics. It does have a pleasantly spooky soundtrack, but that’s hardly enough to save it. Skip this one.