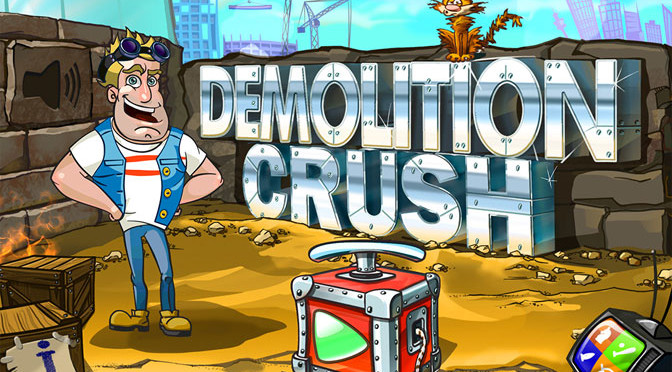 What most people like about action movies is fighting, guns and explosions. There’s something about explosions that seems exhilarating. And that’s a good thing, because that is what Demolition Crush is all about.

In Demolition Crush for the iOS, you get to blow up structures as a demolition expert. In the story, such that it is, you happen to be a guy who loves his job and has been blowing things up unofficially for many years. So it’s nice to be able to take your love and talent on the road, even if you do seem a little bit crazy.

The main objective is to place bombs on the structure and press the detonator button to blow it up. Passing levels requires the player to have the debris fall down to under a specific line that is shown during gameplay. Points and rubies are achieved by clearing the levels.

The player starts a level with a random number of bombs. Once you complete the level you obtain points. In order to get extra points and rubies the player has to drop the structure onto golden safes and try not to blow up a lady that stands in the way. Why she wouldn’t clear out is anyone’s guess, but you have to try not to harm her. Perhaps she’s the main character’s girlfriend. The rubies are used to purchase stronger bombs to make the levels easier. You are also able to purchase an app to buy more rubies at various price points per package.

Demolition crush has hundreds of levels for hours of play. One of the few drawbacks of this game is that the player has eight energy bolts and it costs one bolt for each level. To gain back the energy, the player has to wait 50 minutes for one energy bolt to regenerate or use the rubies to get the energy back. That means that the free version is loaded with a micro-transaction engine, and the more you like the game, the more you are compelled to spend money. At least you do get a nice test version, and can play through without spending money if you want, just with long waits between sessions.

This game has a simplistic control scheme, just tap on the bomb and  then point to a certain part of the structure. After placing the bombs on the structure, the player taps the detonate button and watches the explosion take off.

The graphics are two dimensional with a cartoon-like art style. The structures look similar to the structures in Angry Birds and some are designed to resemble historical or iconic structures. The game can also connect to Facebook so you are able to challenge friends to see who gets a higher score.

Explosions in games are just as great as watching them in movies. This game lets the player create explosions for fun, with a few drawbacks that force you to wait unless you pony up some money. You can’t blame the developer for trying to make a few dollars, but some people will certainly be turned off by this.

Demolition Crush earns a respectable 3 out of 5 GiN Gems.