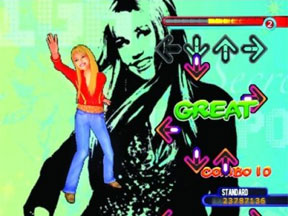 Dance Dance Revolution: Disney Channel Edition is one game that developers have obviously worked hard to get right for the preteen audience. Age-appropriate music, fun and flashy graphics, and a variety of game-play modes will keep kids interested for quite a while.

Sure, the obvious marketing ploy here is the use of music and on-screen characters from Hannah Montana, High School Musical, and other Disney Channel productions. But for the dancer who wants something more than the original match-your-feet-to-the-arrows competition, some interesting options are available.

For instance, in Magic Mode the player selects an on-screen avatar from the fourteen different characters available and another as an opponent. Outscoring an opponent is rewarded with a new outfit for a character and the chance to continue until everyone’s wardrobes have been expanded. Collect them all and win!

Lesson and Training Modes are available to practice basic skills or specific songs. And there’s an Edit Mode for budding choreographers to design their own dance routines.

As a big fan of the arcade versions of DDR and an adult well past the target age for Disney Channel products, I was prepared to be less than impressed with this edition. Luckily, there are accommodations for older kids and adults who want something more than the Disney factor.

Health conscious players who wonder how many calories they burn on the game can use Workout Mode. The fitness monitor offers several difficulty levels, follows weight loss, and calculates the distance jogged/danced. And if you need to take a break from the Disney music, three songs similar to the ones from the arcade game are included.

The basic DDR game, called Free Play Mode here, offers the usual single and two-player options. Each player can select their own difficulty level, so experts and beginners (i.e. fleet-footed kids and their less-agile parents) can dance together. For a cheap thrill, try the Double Play option – one dancer covering two dance pad controllers.

The game is available either bundled with a Konami dance pad – the package I have – or without. My one real difficulty wasn’t with the game itself as much as the included controller.

My second dance pad is the least expensive one I could find, the GameStop product. Its surface is more textured and it’s less sensitive around the edges of the various buttons than the Konami pad, which was helpful for my adult-sized feet. If you find that you’re simply not communicating well with the game, a different brand of controller may be in order.

Overall, this is a great choice for a family game. It gets the kids off the couch with music they know and enjoy, and anyone else willing to look like a dancing fool can jump right in.

And if your kids are crazy about Hannah Montana and the cast of High School Musical, well, bringing this one home will probably make you the coolest parent in the world.