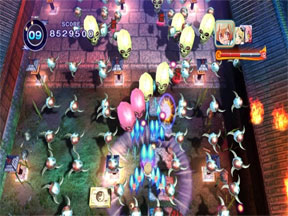 Shoot-em-ups comprise a genre not for the faint of heart, from scrolling shooters like Lords of Thunder to bullet hells like Ikaruga and Perfect Cherry Blossom where the player has to dodge overwhelming amounts of projectiles while attempting to finish a level. These kind of games sometimes made people curse at regular intervals until the player memorized the level patterns. Mamorukun Curse takes cursing to a more literal extreme, as it has a whole curse system that is integrated well into gameplay, creating a significant amount of depth to make this game stand out among its peers in the shoot-em-up genre.

While Mamorukun Curse is heavily characterized by bright colors and cheerful overtones, you shouldn’t be fooled. On the danger of channeling the Xzibit meme, this is a game where you try to survive, but will curse while you curse.

The actual gameplay of Mamorukun Curse is like a mixture of Twin Bee and Pocky & Rocky, as the screen doesn’t move your character automatically in most stages so the player does have a little bit of freedom when choosing paths or deciding exactly how to tackle oncoming foes. You can move freely and take your time in the levels, though you cannot backtrack. The signature of this game, the curse mechanic, is definitely a bit different and could have used a bit more explaining in the actual tutorials than it did, as a lot of other players were completely unaware of how deep the curse function actually is. Rather than have a limited supply of bombs to erase shots from the field and help the player survive "Oh, snap!" moments, the curse bullets function as a pseudo-bomb since initiating it will clear the screen of enemy bullets, but also offers three separate functions depending on how long the player holds the button and what they shoot with it.

If the player just taps the curse shot button, the bullet fired will eat through a few regular mobs while larger foes will get caught in a curse field. Smaller enemies that get cursed fly at you more quickly while larger enemies fire more projectiles at you, but those that get cursed are also getting their health quickly sapped. Abusing these mechanics are the basics to gaining a lot of candy (points) appearing onscreen for the player to collect and shoot for the high score. Holding the curse shot button will charge it and create a much larger curse blast when fired, cutting through all regular mob enemies like Honey Boo Boo through a buffet, while if the shot gets stopped by a larger foe the curse field becomes just that much larger and lasts longer.

Even more interesting, creating a curse field and then standing in it yourself will curse your character, changing their firing pattern for a limited time and boosting the power of the shots significantly. The curse mechanic makes for an extremely effective risk-reward mechanic, because using it carelessly will lead to a large number of speed boosted, powered-up enemies that will quickly ensure that player’s demise, while careful use of it can be an easy godsend when the screen is channeling a Touho Project game and the screen is just littered with bullets.

Mamorukun Curse is a very Japanese game, that much a player can gather from an initial glance: The characters and environments are clearly inspired by anime, the same applying to the music which sounds like it could have come right out of Vocaloid. The designs for each of the seven playable characters in this game are extremely cute, and each one has a different shot pattern that the player can take advantage of depending upon his or her playstyle. Mamoru, the titular character, for example, shoots his bullets straight ahead, while another character has homing shots- even more interesting is that Fululu fires in a pinwheel-style pattern, shooting powerful bullets straight ahead on a revolving axis around the character. So, there’s a good amount of variance in a game that’s all about how you shoot and what you shoot.

Thankfully, there are plenty of modes to choose from in Mamorukun Curse, the first of which most will experience being Netherworld Adventures which is essentially the story mode. The story for the game is pretty straightforward: Several characters have an untimely death and then suffer from amnesia regarding the individual details surrounding each of their demises. Fululu, the grim reaper (or death god, depending on if you want to use the term shinigami or not), gathers the party together and tells them that she called upon them so they could assist her in saving the Netherworld. Of course the group readily agrees to her request rather than spending their time trying to become Spirit Detectives at the behest of a wise-cracking baby (that’s a Yu Yu Hakusho joke hitting you from the days of Toonami), so off the group goes on their adventure. One unique feature about the adventure mode is that you get to select from the five available characters as your ‘lives’ and if one falls, they’re unconscious and you play the next character in your lineup until you can get what essentially constitutes a 1Up heart to revive the fallen character. Since each of the playable characters have different firing patterns, learning how to use each of them will go a long way in helping you complete the story mode.

There’s also an arcade mode for players to enjoy, where you can select any level of the game and play them all through in any order you so choose. On top of that, there’s also a challenge mode though by the time players get to that, it becomes pretty obvious that you’re playing minor variations of the same few levels, though reinforcing level memorization is pretty much status quo for a shoot-em-up so those who greatly enjoy these kinds of games will be right at home with the amount of content provided.

One thing that just about anyone should be thankful for is that the buttons can be remapped to the player’s choosing, and there are two overall control methods. The twin stick setup makes aiming a breeze, while there’s another control method where players fire in the direction that they move, controlling the character with the d-pad instead for more precise dodging. There are obvious positives for both control methods, though I personally preferred the dual analog method.

Now, while the graphics of Mamorukun Curse are bright and colorful, the models for the playable characters and the enemies are also pretty poorly done, reminiscing of something more recently seen on the Playstation 2. While shoot-em-ups are generally not known for their groundbreaking graphical prowess, it is one thing to note for those who find that sort of thing to be important. Similarly, the game does feature voice acting, but it’s all Japanese- there’s no English dialogue featured in this game for those who don’t like reading box after box of dialogue to get a sense of the plot (not like it’s necessarily sensible to begin with, mind you). Of course, the dialogue is accompanied by well drawn character portraits and special illustrations that have quite the attention to detail on them and set the silliness of the mood perfectly.

To summarize: Mamorukun Curse is a very interesting shoot-em-up that holds a mechanic that separates itself from a lot of similar games in its genre, while also maintaining a distinct nature of being easy to approach but difficult to master. There are a good number of modes for players to choose from to sate the thirst for a new kind of bullet hell, but those who just play through a game’s story mode once and then never touch it again may want to save their $20 for something else since Mamorukun Curse focuses a good deal on repeating the same content, honing the player’s skills to perfection. The graphics are extremely subpar, with character models more befitting of the previous console generation than that of the Playstation 3, but the music and illustrations are excellently done so long as anime-inspired tracks and images don’t drive you mad. For the shmup lover, Mamorukun Curse might have enough to keep you occupied until the next bullet hell comes out, whereas those who may be shmup curious might find a lot to love here since this can be a solid introduction to the genre.