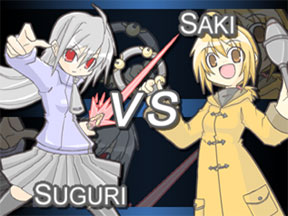 Acceleration of Suguri X Edition is a Japanese 2D shooter available on the PlayStation Network. The game is cute, which is not an adjective generally associated with shooters, but in this case it fits.

Game play involves choosing one of seven different female anime-style characters and then fighting in a timed battle for superiority. Sounds simple enough? Sure. And that is part of this games charm.

During the battle, the characters are represented by the Chibi version of themselves. For those of you who are not familiar with the term Chibi the definition according to the Urban Dictionary is: It is an adjective that means small and/or miniature in a good or cute way. Normally used to describe (young) people or animals, and is endearing. This word, along with kawaii and several other Japanese words, have been taken by America’s “Wapanese” who have gone overboard in accentuating their English speech with Japanese words.

Chibi was probably first introduced to the West through anime, and probably from the name of Sailor Chibimoon, in Sailor Moon.

So now that you have been educated on Chibi, lets get back to Acceleration of Suguri X Edition, which features really cute little girls ready to battle the heck out of one another.

In fact, these little girls use massive firepower to duke it out in a circular arena with various landscapes in the background. For weapons, each girl has her standard gun, missiles and a special skill. I’m fond of the one who shoots a massive lightening blast. I also like the one who spins off killer flowers. So you have adorable little girls with big guns shooting it out to a jaunty techno beat.

Acceleration of Suguri X Edition gives players a choice of arcade style play or versus play, either against other players or the CPU. There are listed rankings and a replay option.

As a side note, I love the replay option in fighting games. It’s always nice to be able to relive past glories, especially when you’ve really given the business to an opponent. Overkill always plays well on instant replay afterall.

This is not Marvel vs. Capcon 3, so don’t expect a huge amount of depth. But it’s cute and fun and being priced under five dollars as a direct download on the PlayStation Network certainly makes it affordable.

If you’re an anime fan or a shooter fan, or just love the idea of an adorable fighting game, you should check it out.