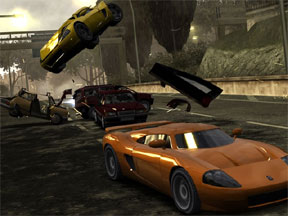 When EA acquired the Burnout license last year, the series suddenly emerged from a typical arcade racer (filled with amazing crash sequences) to an extreme arcade racer where driving dangerously led to victory. Crashing into opponents was not only allowed, it was strongly encouraged, and the end result was an addictive arcade racer which stood out over the competition. Recently there has been a wave of clones (i.e. Flatout) that tried to take some of Burnout’s glory, but nothing comes close to the original.

This year’s Burnout Revenge continues the Takedown based racing of Burnout 3, but now incorporates a new system to extract vengeance against those who race against you. Revenge Takedowns add a little extra oomph to that jerk who ran you into a wall. New methods of takedowns are available, such as Vertical Takedowns (a virtual "Death from Above"), Traffic Check takedowns, and my personal favorite, the Explosive Payback.

Traffic can now be checked from behind, and as a result, the poor victim can now be used as a weapon. Any opponent that is hit by the wrecked car will be wiped out in a Traffic Check Takedown. There are limitations to checking though. Only cars in the flow of traffic can be hit. That means no hitting cross traffic, no hitting oncoming cars, and only small vehicles can be checked, so don’t think of ramming that bus or semi-truck and using it as a weapon.

Crashbreakers, a key component in the Crash mode, are now available during races and road rage events. After a crash, a simple press of the B button will turn a wrecked car into a bomb. Any opposing racers caught in the shockwave are automatically taken down, and an Explosive Payback is the result. Try raising the stakes to a Total Payback for the ultimate act of revenge.

In addition to the standard races, burning laps, grand prix races, and road rages, there is a new version of the Eliminator race. Rather than going over 5 laps, there is now a 30 second clock, and when it reaches 0, the last place car is automatically eliminated.

The other new racing event available is called the Traffic Attack. Basically a method to practice checking attacks, the goal is to pummel through as much traffic as possible in order to keep the clock running. Early rounds are fairly basic, and getting golds doesn’t require much of a challenge. However at higher ranks there is less traffic, and the only way to achieve gold is to strategically check a car into a bus or semi.

Crash Mode is completely overhauled. No longer is it a simple game of "capture the 4x." Strategy comes into play more. Crashes start out with a launch bar similar to the pitch meter in MVP Baseball. Go too low on the meter and the car will stall, or go too high and you will end up blowing the engine. Once the vehicle is launched, it requires the right combination of checking, point of impact, and the use of the Crashbreaker (which this time can be used multiple times as long as the meter is kept at 100%) to score the biggest damage (which this time can rack up in the tens of millions.)

Some people might not like the new Crash Mode, but I favor it more, basing my scores on making the biggest pileup, and not relying on a simple 4x icon.

Playing Burnout Revenge in single player World Tour mode might be fun, but the real enjoyment comes with playing online. Up to six people can take part in races, 3-on-3 road rages, and the addictive Crash Party/Tour modes. Online ratings are based on the ELO rating system used previously in titles such as Forza Motorsport, but are based separately on race modes and crash modes. Overall, the online experience is one to not leave behind.

Last year’s Burnout was one of the most visually appealing racing games available, and that hasn’t changed here. The game is still drop dead gorgeous, but sadly during the Crash modes, there are times when the frame rate takes a nose dive (and considering the Crash Mode in single player mode runs only at 30 frames per second, this surprises me.)

At least I can say here the soundtrack is better. Sort of. I am not a fan of the EA Trax lineups. Sure there have been improvements this year (kudos to EA Sports for adding classic NFL Films music in Madden 06), but still every EA Trax listing is up and coming rock/alternative bands. Luckily for Xbox players they can use custom soundtracks.

But the good news is, there is no more Striker! That’s right, the annoying DJ from Crash FM who interrupted every song during a race is gone. In his place is a new female announcer who only speaks during the opening video and the tutorials for each event.

One thing I will definitely say about Revenge, it is much easier than Burnout 3 was. My complaint about Burnout 3 is that on higher rankings, one wreck will result in the race leader being as high as 20 seconds ahead. That is not the case here. It seems at all times the cars are packed together. That, in addition to the fact that same way traffic is not deadly anymore (save for buses and semis), makes the new game much easier to finish. But in the end, Revenge is the epitome of the extreme arcade racer. In fact, I would love to see an arcade version come out. If EA can come out with an arcade Need for Speed Underground (which is rather weak), then why not Burnout?