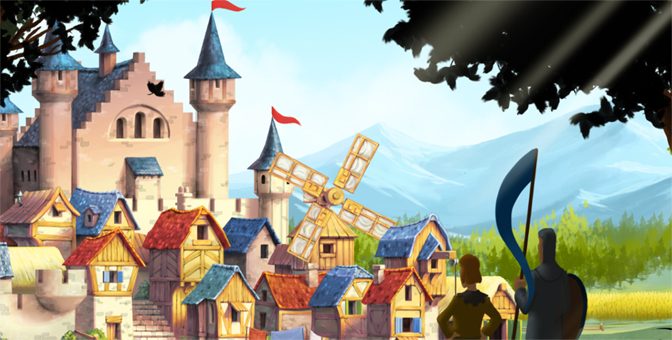 City-building games make up a genre that has been evergreen on PC for years: From Will Wright’s SimCity back in 1989, to Anno, which has its next title Anno 1800 coming out February of 2019, Cities: Skylines, Banished, Settlers… the list goes on for quite a while. City-building games aren’t just common on PC, but also have been found ad nauseam on mobile devices, which is where Townsmen has been residing since 2012 (later ported to Steam in 2016). This particular iteration of Townsmen does indeed seem to be a mobile port, but thankfully has no microtransactions. So is Townsmen worth your time, or would you be better off picking up a competing city-builder? Let’s find out.

Townsmen is a city-building game set in the middle ages- so you won’t be creating complex metro systems in this particular game. Given Townsmen’s mobile origins, the game plays out roughly as you would expect with copious timers to complete various tasks. If you’ve played Anno or any of the games mentioned above, the core mechanics of this game should sound similar: You start off with a castle and a little money, and your goal is to turn your town into a thriving kingdom. You’ll create houses for citizens, fisheries, farms, tailors, marketplaces, and plenty more. 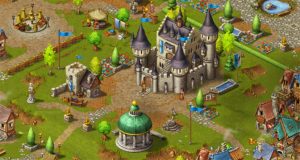 Everything is dependent upon one another in Townsmen, which is where the addiction from the core gameplay loop lies. For example, you create townhouses which bring in new citizens, and they can be given various jobs throughout the kingdom. After creating townhouses, you can build a farm to generate food (assuming you assigned a farmer to work on it), and then can make a sheep pasture to give you wool. With that wool, your weaving mill can produce fabric, and with fabric a tailor shop can produce clothes, which can make your citizens happier or be sold at the marketplace for more funding. Each one of these buildings takes time to build, and their production similarly takes time, so at the beginning of the game there can be quite a large amount of waiting for your next step in a production chain to be readied.

Admitting, this is more of an issue during the extremely lengthy tutorial, as once you get into a free scenario you can build to your heart’s content and can have multiple projects going on at once, rather than being bottlenecked at every turn during the tutorial. And it is so terribly long given how ridiculously simple this game is: You set up various production chains, build up a nest egg (hopefully) before bandits, fires, or literal acts of god wreak havoc through your town. The core gameplay loop isn’t so complex that the tutorial to the game needed to take as long as it does, though it’s probably better to have too long of a tutorial than not have one at all. 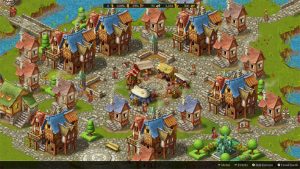 Overall, you simply need resources. You’ll accrue wood, which can then be used for large numbers of other production chains, such as making new buildings, charcoal, which in turn can be spent with iron ore to make iron, which can then be used to make tools, weapons, armor, and more. So essentially, you need to setup places for peons to live, make a place for your minions to produce resources, another place to refine those resources, possibly make another site to refine what has just been refined, and then use those items to make more money, repair things, or make other, fancier things like upgrades to any of the previous so you can do these loops faster. Additionally, there are research items (essentially a skill or perk system) to unlock that can give you a great number of temporary bonuses, which largely speed up the creation of your town, a production chain, etc… These research tasks can be basically anything from giving you additional resources when items are collected, or giving you some extra cash from taxes, so a lot of it works toward helping you spend less time waiting, as everything you need to succeed in Townsmen is cash, citizens, and of course, time. 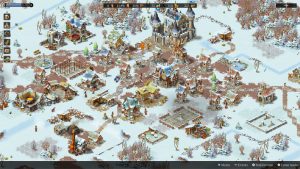 Of course, true to its mobile origins, players can spent some in game currency to make a something instantly build (instead of forcing you to wait for people to come and fill up a meter to build it), among other things, so you can shortcut some of the time investment if you have extra of that currency laying around. The currency in question, however, is not the money you squeeze from your citizens’ tithes, it’s actually an added currency called prestige. You can assign multiple workers to build something and they’ll build faster as a result, but you can spend prestige to build something instantly. It can also be used to unlock structures you otherwise don’t have access to at that point in time. This was most likely the ‘premium’ currency of Townsmen back when it was on iOS and Android, and in the Switch version you obtain prestige by accomplishing various side missions that pop up as you play. Experience you earn, as well as unlocked research and prestige, carry over map to map. Prestige is basically the Skinner box currency item of Townsmen, and it can be used to trivialize difficult scenarios if a player would so choose, but you do have to earn it, so it’s not like you can just spend your way out of problematic events.

[amazon asin=B06XXWWNHX&text=Pick up Townsmen from Amazon!]

On the subject of problematic events, there are a number of disasters that can afflict your town and cause you problems in completing various scenario levels in the game. For example, a disease disaster can hit your town and cause massive loss of workers and interruptions in your production until you set up an infirmary and have a doctor. Fires, bandits, apparently lightning strikes, etc., can all occur too, and there are typically things you can build that can help you through or circumvent these events. 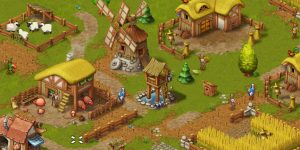 You can play with a controller, or if in handheld mode you can lose the controllers entirely and play on the touchscreen. The controls may take a brief moment or two in order to get used to them (as there were some odd choices made), but by the second or third tutorial level you should have them down pat without any issues at all. As far as graphics go… the game looks like an up-res’ed mobile port, or perhaps an up-res’ed mobile port from Steam to the Switch. The sound is merely okay- nothing great, nothing awful, but not a single of these tracks should stick with you once the game is closed. 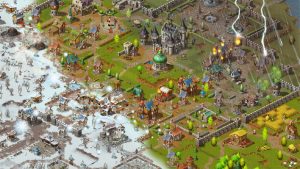 Overall, Townsmen is an okay city-builder. It’s not revolutionary, it’s not terrible, it’s just right about average and is actually kind of a fun time waster to play through the different scenarios that come with the game or mess around in sandbox mode for a while. Once you figure out the core gameplay loops and get a lot of research unlocked, the game becomes much, much easier to reach those, “I’ve built the best thing ever” highs and then…. eventually it will lose your interest because it’s not as deep as Project Highrise, but that’s probably a bit much to ask of a $20 timewaster, and that’s precisely what Townsmen is. 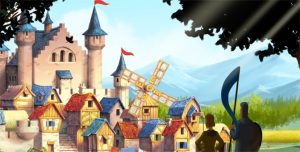 What Townsmen may well be is a reasonable gateway drug into this genre for someone who hasn’t really gotten into these types of games before- as the gameplay loops are actually quite addicting, and the core gameplay loop of establishing production chains is simple enough that a younger, less strategy-minded player would be able to jump right into it without issue. If city-builders aren’t your thing, Townsmen will not make you a convert, but if you’re really wanting to scratch an itch for a city building game and maybe Cities: Skylines is too daunting for you, then the more casual choice of Townsmen may make a better choice, but if you want a more in-depth city-building game, Project Highrise and Cities: Skylines are already on the Switch, albeit at a higher price point.

One thought on “Building Up A Home With Townsmen”