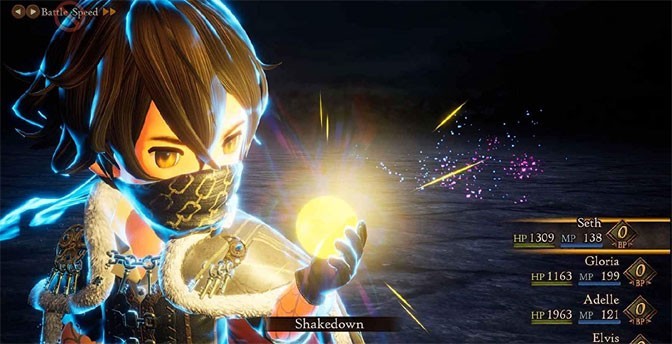 Have you ever met someone and felt like you’ve known them your entire life? Their manner of speaking, personality and quirks all have a familiar, comfortable essence about them that instantly puts you at ease, and you become fast friends.

Bravely Default II is that person in game form. If you’re a fan of JRPGs, everything about Bravely Default II brings a sense of familiarity, depth, and, most importantly, fun. Familiarity shouldn’t be confused with something that feels stale, though. The developers at Claytech Works have created a game overflowing with charm, polish and quality that, after dozens of hours, still offers the urge to keep exploring and discovering more surprises.

The game hinges on the same combat formula of past Bravely Default games. Each turn, you can take an action, brave or default. Taking an action means using an item, skill or basic attack, which is standard fare for turn-based combat systems. Combat’s depth comes with the other two options. 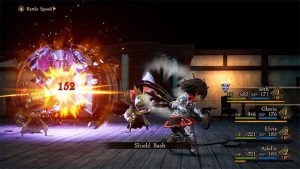 By selecting the brave option, players can take up to four actions at once. The trick is weighing the consequences of acting multiple times versus what may happen later. Every character gets one battle point per turn, with characters able to make a maximum of four actions in a single sequence. You can borrow against future turns to take actions if that character hasn’t accumulated enough battle points yet, but there’s a catch. If the battle hasn’t ended, any characters with negative battle points skip their turn until they get back to zero again, leaving them fully open to attacks without a way to respond.

That’s where the default option comes in. By choosing to default, characters assume a defensive posture until their next turn and also save up a battle point, with the ability to gain three extra actions on a turn, for a maximum of four. Different skills also allow you to gain battle points, and some can even take away ones from enemies, making their management a key strategic element of combat. 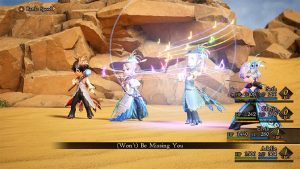 Being able to take multiple turns is only a part of the combat, though. Anyone familiar with JRPGs will know about the classic jobs system. For those unfamiliar, a “job” is a class with a set of skills, weapon and armor proficiencies, and statistical attributes. Each of the four characters in Bravely Default II can have two jobs equipped at one time, with your main job determining your attributes and effectiveness with specific weapons (in most cases).

For the most part, you’ll want a balanced party, with a strong offensive magic user, a healer, an all-out damage dealer, and a tank or support role. However, as the game progresses and more advanced jobs unlock, many of those roles combine into single jobs, opening up the possibility for unique class and party combinations. 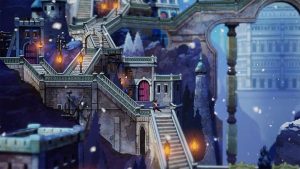 All of this is the norm for JRPGs, and from a mechanical standpoint, Bravely Default II doesn’t separate itself from the pack in that regard. The thing is, that it doesn’t have to. While it may not have a novel gimmick, the game nails its execution so well that its polish stands out all on its own. It has its own character that makes it unique among other JRPGs. 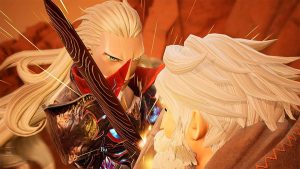 It’s the subtle yet clever design choices that help the game push through the traditional JRPG level grind, with exciting combat options, flashy skills and attack combinations that all feel satisfying to pull off. Additionally, Bravely Default II allows you to speed up combat to four times normal speed, meaning when you’re pushing for an extra level to take on a challenging boss, you can skip through most of the animations and get there faster. 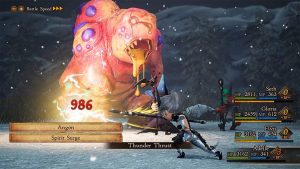 All of this occurs through a gorgeous, often whimsical backdrop, with grandiose settings and terrific enemy and character design. Of particular note, the panoramic view of each town is gorgeous, and subtle details in every area are a joy to marvel at. Wonderful voice acting and visuals combine to create a magical fantasy atmosphere that fans of the genre will find familiar yet thrilling all the same. 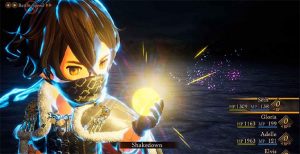 Bravely Default II doesn’t do anything to revolutionize the RPG genre, but it doesn’t have to. Apple doesn’t reinvent the iPhone every year — it makes it better through incremental improvements and enhanced features. Bravely Default II does the same for JRPGs, not going out of its way to reinvent the wheel, but instead offering something so polished and enjoyable that fans of the genre will immediately dive in and find something to love.

If you’re a fan of classic JRPGs, you’ll love Bravely Default II, and if you’re not, this may be the game to convert you.