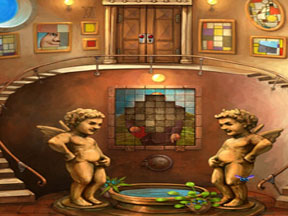 There is a first time for everything, and for me it is reviewing a game on an Android device. Yours truly got the honor of meeting the great folks at Herocraft games personally, and they wanted me to review this game for them.

At first the Tiny Bang Story wasn’t working on my device, which was an old LG phone that has been my anger management friend for months now. After a five minute adjustment the game was running at full speed and I delved into my first android title.

The first thing I noticed was the stellar graphics. Every color was a hundred percent and the backgrounds were beautiful. Every building, object and cloud was bright and vivid. Tiny Bang Story is easy on the eyes and really enhances your puzzle experience.

That’s right, in case you haven’t figured it out yet, I got another puzzle game. I find it funny the shear volume of puzzle games I get. Sadly, because of this, I’m getting really good at them and in some severe cases doing puzzles in my dreams. Despite having this severe puzzle based insomnia I continued through Tiny Bang Story.

While the hours melted away I fumbled through some of the puzzles. This game can’t be considered hard, but it can be considered challenging at times. The learning curve for me was roughly thirty minutes. Once I got the hang of the interface, I was off to the races. I was enjoyed both going on the scavenger hunts and putting puzzles together.

The plot of the game is that this little steampunk-like world has been devastated by an asteroid strike. Your mission is to help rebuild everything, which is done by traveling though the little world, searching for the correct parts and other needed hidden objects, and then using them to solve puzzles and extremely difficult brain teasers.

One cool feature of this title is that all the pieces you collect in each game can be put together to form a giant puzzle of your world. Simple, yes, but nevertheless it’s really cool. Puzzles are pretty varied and endlessly entertaining.

The only severe issues I ran into were a few response fails. There were times when I would be tapping and nothing would happen until the hundredth tap. That did take away from my experience, but it didn’t happen too often.

The only other issue I had was that there was no tutorial or back story. Tiny Bang Story just kind of drops you in the game and says to have fun. That’s where the half hour learning curve came from. It took me that time to make completely sure I wasn’t screwing up too bad. Adding a tutorial would help out quite a lot.

All in all, Tiny Bang Story is worth getting. Either on the iOS or Android platforms, it’s a stellar buy. In fact Netflix and Xbox couldn’t pry me off this game. Hopefully I get the chance to review more of Herocraft’s titles. They seem to have a good feel for what gamers want, especially in the world of puzzle-solving.

If you want to check out some of their other titles, their website is www.herocraft.com. For this review, Tiny Bang Story earns a respectable 4 out of 5 GiN Gems.