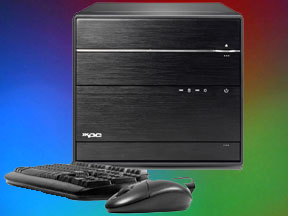 PC gaming is a part of this industry that has always eluded me. I play the occasional strategy game on my laptop to pass the time. But major gaming on the PC has always been a cost issue, as I know it is for many people. But for that price, I have always heard how PC games have the best graphics, so I have always wanted to take a look and see if this statement is true.

Thanks to the kind folks at Shuttle Computers, I got a chance to run their SH87R6 gaming model. When I opened the packaging I was stunned into silence by its size. This tiny Oompa Loompa sized computer is less than a foot high or wide. I started to dig through the box looking for the rest of the computer. Rest assured the entire computer was there.

Once I got everything hooked up I had a difficult time figuring out what game to play. Although I have never played games like Call of Duty or Battlefied on a PC, truthfully I don’t believe I could with a mouse and keyboard. Finally I settled on Metro Last Light (which is a game I have always wanted to play) and loaded the game up. Now unlike most PC gamers, I did not use a keyboard and mouse, instead I plugged in a controller so I could keep my comfort level with the controls.

I expected good graphics from this computer, instead I got great graphics. My jaw unattached itself from my face and hit the floor…and that was the main menu. Console gamers, even with an HDMI connection and a good TV, have no idea how much better things look on the PC. I know I didn’t. It’s like night and day. Given the size of the SH87R6, I didn’t really know if it could handle the latest and greatest graphics, but it did.

The key to the Shuttle’s success is that it supports the latest and greatest of everything. For example, it runs the new Intel Core i3, i5, i7 LGA1150 CPUs. And while a barebones model will support the Intel HD graphics, the SH87R6 is capable of running dual-slot graphic cards. Also provided are one PCI-E x16 and one PCI-E x1 slot in which a single slot graphics card and an expansion card can both be added, or one dual-slot high-end graphics card can be added for customized 3D graphics performance.

In terms of price, it depends on what you drop inside. A barebones system is pretty good, and can be found for under $300. Dropping in a high end-graphics card might double the price, but would ensure a top-of the line gaming system for at least several years.

Back to gameplay, once the actual Metro Last Light game began, I thought I was going to die. Every monster looked lifelike, every weapon detail was perfected. This tiny computer put my Xbox to shame, that’s for sure.

After losing at least three days deep in the Metro alone, I decided to see how it would handle an older game. So I installed my favorite game of all time for the PC, Rome: Total War, and wanted to see if this computer made the classics better.

Oh it did, on so many levels. Rome did not appear to be from the early 2000’s in any sense. All of the graphics were smoothed out and the audio sounded more alive. Chariots, catapults and horses all sounded better and made me sad I never owned one of these gaming PCs before.

Although the computer passed all of the gamer tests, I decided to throw it through another gauntlet. Using some of my special effects software, I placed it though an incredibly strenuous rendering test. Last time I tried to render something on my old computer once, it ended with it crashing, the battery stopped charging and the fan stopped working. Shuttle’s computer acted like I told it to open a Word document. I doubt there is much that this little system could not handle.

Overall, this computer should be on your to get list. With its compact size it’ll fit anywhere in your home that you could possibly game at (yes, even the bathroom). After playing this computer, I don’t know if I can go back to console. Shuttle’s SH87R6 model earns a perfect 5 GiN Gems out of 5 from me.