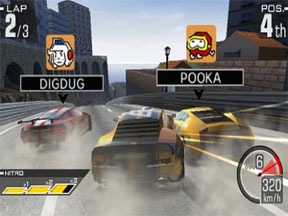 When I first started playing Ridge Racer, I flashed back to my childhood, sitting in the arcade playing Crusin U.S.A. Namco’s newest racing game has that vintage arcade feel to it with the mobility of a portable game system.

Like most arcade games there is no story or main mission. The game consists of playing grand prix after grand prix in order to unlock new cars and races. The other modes consist of multi player and single races. With the three dimensional capabilities of the 3DS, Ridge Racer seemed like a potentially exciting game.

Even with the inability to upgrade my vehicles, I enjoyed the flashback to the days when you didn’t need to worry about tuning up your car and buying body kits.

I was wrong though, eventually.

Let’s start with the positives since there are fewer of those. The game is real easy to play and comprehend. As soon as I picked up the game I was racing like an experienced player. Drifting is really simple and the cars handle about average. Ridge Racer makes sure you don’t over drift. Sadly that ends the few positive mechanics of the game.

On the flip side, there were an extensive amount of glaring flaws. One of which was the weak choice of characters. While you can use your picture for your profile, your opposition consists of the ghosts from Pac-Man and what looks like a few rejects from Sesame Street. It also suffers from the same arcade flaw of predictable opponents and they all place the same every time, every race. The other racers raced the exact same way to the point I could predict how far along the track I’d before I passed certain characters. After ten grand prix’s, I was in fifth after lap one, second after lap two and first at the finish every single time.

Physically, it’s impossible to crash. I over drifted to the point where I was completely sideways and still moving at nearly two hundred miles per hour. Without hitting a button my car straightened itself out and I never lost a position.

While the music wasn’t bad, the rest of the audio left plenty to be desired. The female voice who acts as your cheerleader/coach yells at you about not being in first place as soon as the race starts. Of course she also feels that it’s necessary to tell you when you are drafting half a mile back. Just when I thought it couldn’t get any worse, her voice sounds like claws dragging on a chalkboard.

After a few races I turned on the 3D and had another flashback. Back in high school the criminal justice students had me put on the beer goggles and try to drive a golf cart. Ridge Racer made feel like I was under the influence of alcohol. The 3D only blurred the game and made it near impossible to drive. It’s the equivalent of driving with double vision.

While the game is a great for an arcade racer. It belongs in the arcade. The few levels are redundant and pretty simple. Overall, my low rating of a 2.5 stands on the basis of the game not being worth it’s value. If the game’s price takes a steep fall I would recommend picking it up. While the game had potential, the execution was lackluster.