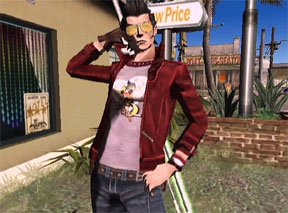 The assassin’s life seems like a tough one. Sure all the badassery gives you the feeling of a rock star, but anonymity and loneliness can only take a person so far. Take the example of Travis Touchdown, the star of No More Heroes. He takes the role of an assassin and gives it the look and feel, all the glitz and glamour of being rock star, yet when you boil it down, all you get is one big tool.

No More Heroes is the story of Travis’ rise to fame in the circle of top dog assassins. To get there he must eliminate the ten ranked assassins above him as deemed by the UAA, or United Assassins Association. Ranked matches require fees to enter, and in order to raise that money, poor Travis must undertake other jobs, including other assassinations and odd jobs like picking up trash and collecting coconuts. At the same time, he also has to make his hair look cool, dress for the ladies, and take care of his cat…tough life.

Travis’ fighting style uses both the beam katana, a light sword (or saber if you will), and the grappling moves he learned while he apparently was training to become a pro wrestler.

Ranked matches are entered like stages, divided off from the free roaming environment of the game. Once in a match stage, the environment is limited to single corridors filled with bad guys for you to plow through until you reach your goal, the assassin you were looking for.

The bosses range from young female students to loony super villains, though none of them vary too much in their abilities.

Fighting with your beam katana consists of mashing the “A” button, while moving from low to high positions by raising and lowering the wiimote. You can daze your opponents by hitting them by pressing “B,” where you can then put them in a grapple, and do different variations of body slams depending on which way the screen tells you to swing the wiimote and nunchuck. While these controls make fighting very easy and intuitive in terms of the wiimote, the repetitive nature of combat definitely causes the levels to drag, making you thank them being so short, taking no more than a half hour to run through each stage. This along with very basic level details causes battling the assassins, who are very diverse and enjoyable characters, to blend together into a bland game.

Outside of your ranked fighting, the world of Santa Destroy is yours to explore freely on your motorcycle. Sadly, this world doesn’t offer much more than the fighting. Sure, there’s a shop where you can change what color sunglasses you are wearing, and a bar with a guy who’ll teach you new tricks, but these offerings are sparse compared to a lot of the other towns you can explore in games. Even cruising on your bike, with all it’s potential for destruction and mayhem, which usually makes these free roaming worlds so fun, is absent in No More Heroes. The only thing you can do on your bike is bust a wheelie if you start up from braking. And when you crash, which is quite hard to do, neither you or the bike is damaged.

The money making missions are like extra mini games that are so scattered and short that they become tedious. Driving all the way across town to mow a small patch of grass for two minutes makes you question the integrity of Travis and of No More Heroes. The things you have to do while coming up with money to join ranked battles seem thrown together in order to give the game an extra hour or two of gameplay.

No More Heroes does come with its good qualities. The cut scenes and dialogue are very nicely done and the recurring characters develop a little through the game. And, while the plot seems straight forward enough, there are hints of plot twist and moral dilemma in Travis’ character that, if expanded upon could make this a worthy opponent to the Rockstar series’. One thing I’ll give a big nod to is the use of the controller speaker as a cellphone that comes into play a few times through the game, some of the first extensive use of the speaker that I’ve seen.

While No More Heroes does make a good effort to bring all the quirkiness and violence of manga and anime, it just doesn’t produce enough depth in its gameplay. You’d probably get as much joy just watching as you would playing this game.

I’ll give one last prop to the game, since I did actually have a good time playing it. In fact, it’s one of the best non-Nintendo releases to date for the Wii that I’ve played.