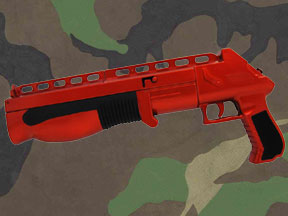 Just because something sounds good on paper doesn’t mean it will come out as well in practice. Forgive my falling back on this aged saying, but this is the immediate notion that Komodo’s new Buckshot Pump-Action Shotgun for the Wii brings to mind.

I was never a big fan of the Wii Zapper to begin with, so the Buckshot had a lot going against it from the start; however, to a gamer that might actually enjoyed using such an awkward piece of equipment, I will say that the design was fairly inventive, even if it was entirely useless for several FPS games.

As for the structure of this product, the aspect that caught my attention from the word go was that the Buckshot comes with a nunchuck pre-built into the handle. How this works is that the top of the gun’s barrel opens and allows room for the Wii remote to be placed inside the zapper, from there, a latch is pushed forward which causes the insert to both hold the remote in place and make the connection between it and the gun. Voila! Instant symbiosis.

From here, the trigger works as the trigger and the pump action on the shot gun presses the A button. On the handle, you have the nunchuck toggle and the C and Z buttons within easy thumb reach.

As far as design is concerned, the Buckshot makes some good first impressions; however, not every game has such simple control schemes, and therefore not every game will work out as well with this choice of remote add-on.

For titles such as Resident Evil: The Umbrella Chronicles and House of the Dead: Overkill (see Rail Shooters), this set up will work nicely. For other, more involved modes of gameplay, this product will be as useful as a cucumber.

While the traditional Zapper leaves the Wii remote exposed during gameplay, the shotgun keeps the remote enclosed behind a door, making all but the A button and the trigger completely inaccessible.

So while the shotgun will definitely work on simpler control schemes, using it for something like Call of Duty 3, despite what the packaging may read, is pretty much an impossibility without a ton of undue hassle.

Next comes a problem that the Buckshot and the Zapper alike share, and that’s simply the uncomfortable gaming experience that both deliver. Back in the days of Duck Hunt and Hogan’s Alley, Nintendo had it absolutely made with the coolest Zapper ever delivered to date. Simple and handy, the pistol-styled Zapper delivered not only fun, but comfort as well. Sadly, this tradition has not carried on in Nintendo’s progression.

Aiming is hard enough with most intensive games, but adjusting that aim from a sensor strip to lock onto an oncoming enemy sometimes becomes taxing. In addition, without a stock to rest against your shoulder, just keeping the Buck Shot at the ready quickly becomes a tiresome endeavor. That said, simply making do with a bare bones remote and nunchuck isn’t much better, but if I had to chose between the two, the latter method would be more to my liking.

Outside of the sleek design, I would say that this product won’t hold up its end of the bargain for the majority of real FPS players out there, but the truth of the matter is, I couldn’t tell those players where to turn to for a better experience. A fully-inclusive, fully-detailed and reliable zapper has yet to come out of the woodwork. In the meantime, at least the buckshot feels nice and heavy in your hands, like a real gun almost.