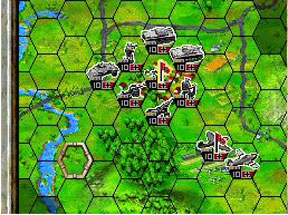 Honestly, you should make sure you enjoy strategy games before you pick this one up. If you don’t you will be B-O-R-E-D. But if you do enjoy deep strategy, then Panzer Tactics is the first real strategy game for the Nintendo DS, and as such is a pretty good effort.

I did not have the opportunity to play this game in multiplayer, but other gamers have pointed out that Panzer Tactics DS is fine for single player but can clash when played in multiplayer. Gamers have said that the game offers an average "pass the DS" multiplayer approach but will leave you confused as to what the last player did during their turn. This can be constricting for a fan of strategy multiplayer games.

The graphics were impressive on the top screen view more than the bottom screen. The bottom screen gives you a honeycomb-like grid with the characters and vehicles sort of cluttered into the spaces. The top screen was more detailed with good color contrast.

You’ll find a more open combat system that allows players to customize missions and purchase any available units. This is a good feature because I like having that kind of freedom in a game.

Panzer Tactics DS is a great game for history fans and strategy fans alike. It’s a good blend of the two hobbies. I would recommend looking into Panzer Tactics DS for a game to sit down with for a while, especially with such open features like the missions and unit availabilities for purchase. These features leave room for players’ creativity in their personal game play.

The game takes place in 1939, which students of history will recognize as the time when the second world war was gearing up. And even though the game’s title would seem to imply that you are only playing as the Germans, in fact you will take command of both the Russians and the Western Allies which are comprised here of British and American units.

And its also not all a big tank war. You will be commanding aircraft, infantry and even ships in thee historical campaigns.

That breaks down into thirty missions which are mostly based on real operations. There are a few missions that are more or less secret ones which take place behind enemy lines, just to add in a little twist to keep you on your toes.

In addition to the group units, you also have 30 heroic officers whose names you will probably recognize for the most part. These great war fighters add morale and motivation to their units. The effect some of them have on their men is quite incredible really, turning regular troops into near elite status.

Like I mentioned earlier, this is no real-time click fest. Those of you who can’t handle deep strategic thinking and planning should stay far away from Panzer Tactics. You really need to be thinking several moves ahead of the computer opponents as you command your armies to move and capture objectives.

Obviously once the battle begins anything can, and often does, happen. Sometimes a superior force is overwhelmed. Sometimes the computer AI acts in an unexpected way. As such, the game has near-infinite replay value given that it is highly unlikely that any two full battles will come to the same results. And even if they do, the way they get there will be different. The cool thing about this is that it means you can try different strategies to see which one works.