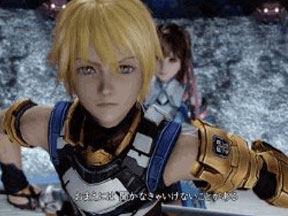 The past two releases for the Xbox 360 from Square Enix left me feeling somewhat disappointed (Infinite Undiscovery and The Last Remnant). The games felt rushed and incomplete, and I was wondering what was going on with the company.

When I received Star Ocean, I hoped to see a turn around in the quality and was quite delighted when I popped the game into my 360. Square is back!

This was the first in the Star Ocean series for me to play, which was not a real issue since this is the fifth entry in the series, but takes place before the first Star Ocean. It occurs after World War III and the earth is basically ruined, thanks to the after effects of bombing. The remaining civilization is underground and a new home is needed.

The game begins with teams going into space to seek a new home. You play as Edge Maverick, a 20 year old male from Earth. He volunteers for the Space Reconnaissance Force (SRF) maiden voyage and is accompanied by his childhood friend Reimi, who is the navigator on board.

Right off the bat you will enter the battle simulator to teach you rush combos and blindside attacks. The combat system is quick to pick up and not overly complicated. This made grinding less tedious than in the past.

The game quickly moves into the action on your first planet. The variety of enemies you will encounter on each planet keeps the game fresh. The storyline develops at a nice pace that kept me from getting bored. I did find the cut scenes lengthy, but the story was well written so it was more bearable to sit through.

Each of the characters has a preset role which brought a strategy to the fighting, more so because you are able to change characters mid-battle. I was glad to see that random battles were not present and the bonus board allowed for me to level rather quickly.

I was able to really customize the characters by purchasing skills and improving upon them. The item creation interface is also very user friendly. I could have easily spent hours rearranging combinations for new recipes and items. When you changed weapons the graphics reflected the new weapon, where armor changes did not.

The game allows you to pause, which I’m a huge fan of! I always found it a bit tedious to filter through your inventory in real time! One feature I would have liked to see is a save anywhere! Running around trying to find the save spots, thankfully they are marked on the map, are not to my liking. Another small feature I really missed is a display meter for gamma/ brightness. I really do not want to change the settings on my TV to suit playing one game.

The final thing I would have honestly liked to see is the original Japanese voice track. I would rather read the English dialogue than sit through long cut scenes with the lip syncing clearly not matching up, even remotely.

Star Ocean: The Last Hope is a game that is worth every penny. The replay value is there in abundance because every time you are going to find something you missed before. You will also want to replay it, making the numerous different private actions, and you will want to see all of the different endings. I would highly suggest this title to any fan of RPG’s and also as a good starter for someone new to the genre.