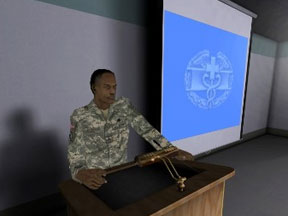 Video games allow us to experience things that we may never experience in our lives. They put us in the cockpit of the world’s fastest planes. They let us go on the field and play professional sports. And yes, video games also put us on the front lines. From the beaches of Normandy to a modern conflict in the Middle-East, military first-person shooters allow us to, in part, live the lives our soldiers live. What better group to provide gamers with a military shooter than the Army, itself?

America’s Army: True Soldiers is a game with an interesting concept. You have just joined the military and are experiencing the wonder that is boot camp. More specifically, you are experiencing the shooting range. This is where players will first notice a problem. Gamers are required to choose different weapons and take them out on the range. That’s simple enough. After an annoyingly dull, uninspired speech about the gun you are about to fire, players are allowed to go pick it up and take shots at targets at will.

Ok, so the weapons training is not that in-depth. But the game has to have more to it, right? The game features a mission mode, which seems like a logical part of any shooter. Unfortunately, the mission mode is all war games. And I literally mean war games. There is no live ammunition, just blanks. There are no enemies, just other soldiers who are "playing" at war. And when a soldier gets hit, he simply sits down with his head bowed looking distraught.

Another problem with the war games is the fact that roaming around is impossible. Gamers must stay close to their commander at all times. Venture too far away and you will find a timer pop up in the corner of the screen. If that timer hits zero, you lose.

In addition to poor game modes, playing over Xbox Live is nearly impossible because it is, pardon the reference, a no man’s land. I could not find a single match to get into with the settings set for all game modes. America’s Army also features long load times which are annoying.

Beyond the terrible gameplay, the game’s instruction manual also brings its own problems. Many people claimed (and rightfully so) that this game is nothing more than a recruiting tool for the Army. After reading the instruction manual, it is evident why these claims were made, with each class of soldier having a description of the qualities it will teach you rather than describing what it does in the game itself.

I have no problem with the United States Army advertising. They protect our country and make tremendous sacrifices. But disguising a recruiting tool in the guise of a video game is a low-ball tactic for any organization, the Army included.

So, to review what we have so far, the game has poor gameplay, long load times, and poorly disguised advertising.

The graphics do not fall on the good side either. The guns are generic looking with very little detail put into them. You would think the army would play up how cool the guns look if they were trying to bring people into their organization. Environments are also bland and, because of the need to stay near the commander, cannot be explored in any great detail. The targets that players must shoot at in weapons training are nothing more than red and blue squares. Another problem is the targeting reticle, or lack thereof. It is more often than not a painstakingly tedious task to take aim at a target. And, by the time you finally train the sights on it, it’s gone. Of course in real life there is no reticule, unless you have one of the new smart guns the Army is testing, but still, is this a game or a recruitment tool?

Not helping the graphics out any, the sound in the game is nothing spectacular. The commanding officer giving orders has the same exact voice for every order and every weapon description. He sounds more like he is giving a history lesson than trying to motivate his troops. The sounds of the guns being fired are not bad, but again, are nothing that will blow you away.

There were many people who said that America’s Army: True Soldiers was one giant advertisement for the United States Army. My response to that is, I hope not. If it was, look for troop numbers to drop, not rise. This game felt more like doing work than having fun. America’s Army: True Soldiers gets 2 GiN Gem out 5 for doing just about everything wrong a video game can do.